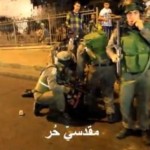 Calling to bolster police presence in the streets of the capital as a show of deterrence, Netanyahu “instructed that forces be increased in the confrontation areas and that vigorous action be taken against those who disturb the peace.”

Palestinian youths, mostly, but not exclusively, in the capital’s eastern sectors have perpetrated hundreds of rock and vandalism attacks against Jewish homes and businesses, and destroyed dozens of gravestones on the Mount of Olives. Rioters and vandals have stoned and firebombed motorists, and bus and light rail passengers, injuring dozens of passengers and pedestrians, and causing millions of shekels in direct, and indirect damage.

As well, rioters have perpetrated over 150 attacks against the light rail cars, track and stations, in Arab areas in the northern part of the city, causing millions of shekels in damage, delays and rolling stock taken out of service for repairs.

However, despite the staunch calls for a crackdown on crime, a government official told the 0404 news site that Netanyahu is “furious” at Aharonovitch over his inability to quell the burgeoning violence.

According to the source, Netanyahu has expected that Aharonovitch know what steps to take in order to get the streets under some semblance of control.

“Netanyahu is furious with Aharonovitch’s lack of treatment on the terrorist attacks in Jerusalem,” the official said. “The situation is catastrophic. Aharonovitch ‘fell asleep on his watch,’ and now everyone’s getting hit by the ricochets.

“This verges on scandalous,” the official said.

Eyewitnesses at the meeting earlier in the day between Netanyahu, Aharonovitch, Barkat, police officials, and others who deal with the attacks in Jerusalem, said Netanyahu slammed his fist on the table as he turned to speak with Aharonovitch.

Netanyahu, according to those present, gave Aharonovitch five days to boost forces and stop the violence.

Adding that “the current situation must not become the norm,” Netanyahu noted that, “recently there has been stone-throwing, disturbances and violence. I think that we need to deal with this not just due to the holidays but in a thorough manner. The goal of this meeting is to do just that – to see what forces, what capabilities and what steps are needed in order to ensure peace in Jerusalem.”

The already rising wave of pro-Palestinian street violence spiked during the abduction and killing of three Israeli teens by Hamas terrorists in June, and even more so after the subsequent suspected revenge killing of a Palestinian youth by three Israeli Jews. As well, during the IDF’s 50-day Protective Edge in Gaza, Palestinians throughout the West Bank regularly attacked Israeli communities, commuters and motorists.