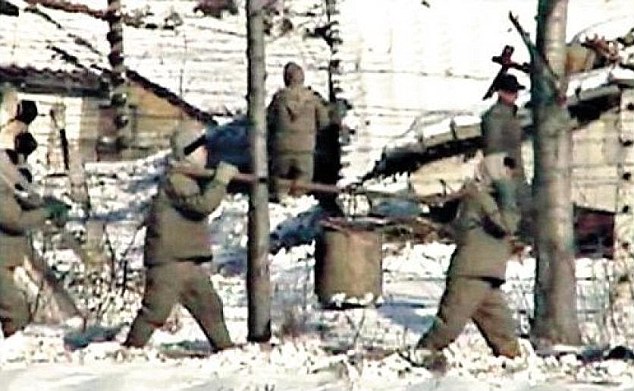 The brutal treatment meted out to North Korea’s political prisoners has been well-documented, but a new report coming out Thursday, based on satellite images, portrays the extensive network of “re-education” camps for less severe violations of Pyongyang’s penal code.

These camps are situated throughout the country, both on the outskirts of cities and in huge compounds in the mountains. Conditions are severe but come with the possibility of release.

The camps are run not by the secret police, who operate a separate system for political prisoners, but by the Ministry of Public Security. They are an important pillar of the regime of Kim Jong Un, a means by which the North Korean population is kept permanently cowed.

The world is transfixed with the nuclear threat from Kim’s regime, but it is ordinary North Koreans who suffer every day, said Greg Scarlatoiu, executive director of the Washington-based Committee for Human Rights in North Korea, which compiled the report.

“It is more important than ever to ensure that the fate of everyday North Koreans trapped in the unyielding gulag systems remains at the forefront of our efforts and the efforts of the international community,” he said.

“A lot of the people in these prisons are there for crimes that would not be crimes in another country,” said David Hawk, an expert on the North Korean gulag and the author of the new report.

Hawk married the satellite photos to testimony he has been collecting for years from prison camp survivors who have escaped from North Korea.

Prisoners in the “re-education” camps are forced to do hard labor like mining in near-starvation conditions. People deemed to have committed serious economic crimes – making too much money in the markets, for instance – can end up in them, as can those who have tried to escape from North Korea.

Horrific interrogations and torture have been reported in these camps as well as in those for political prisoners, who have typically been convicted of demonstrating or speaking out against the regime. Political prisoners are sent for life, often with three generations of their family accompanying them.

There are also short-term forced-labor prisons for misdemeanors in the North Korean system, where people might be held for less than a year but also in appalling conditions.

A U.N. Commission of Inquiry concluded in 2014 that the prison system amounted to a crime against humanity. About 120,000 North Koreans are thought to be held in the camps.

North Korea has repeatedly refused to allow outside monitors, either from the United Nations or the International Committee of the Red Cross, to visit the camps. But the satellite images can go some way to counteract the government’s attempts to keep the system secret.

The close-up photos reveal the tell-tale identifying characteristics of prison camps: security enclosures with gated high walls and barbed-wire fences, guard towers, dormitories, and workshops or mines located within or near the prisons.

One of the oldest re-education camps, No. 1 in Kaechon, north of Pyongyang, is easily recognizable as a large-scale penitentiary, Hawk wrote.

Another prison, No. 4 on the outskirts of the capital, has a clearly visible limestone quarry just outside the penitentiary walls. There is a conveyor belt to transport the limestone rocks into the prison camp. Prisoners were assigned to crush the rocks while others loaded them into large kilns, according to testimony Hawk collected.

As many as 6,000 prisoners, including, 2,000 women, are thought to be held in the Kaechon camp and are forced to work making leather goods such as shoes and belts, a dangerous job because of the toxicity of the glues used.

“Prison hygiene was reportedly appalling and food rations were inadequate, leading to high rates of death from malnutrition-related illness, particularly for those prisoners whose families did not or could not bring them food,” Hawk wrote.

This was standard for the prison camps, according to testimony from former guards and former detainees. The conditions were so bad that many prisoners died.

“The brutal and arduous labor, grossly inadequate diet, and lack of medicine lead to a dreadfully large number of deaths in detention,” the report says.

The North Korean regime also appeared to be building a new forced labor prison camp near the political-prisoner Camp 14, in the center of the country. Satellite images show a 5.6-square-mile enclosed area with clearly visible security perimeters, guard barracks and positions, and checkpoints. There are two areas of self-contained high-security areas within the encampment, as well as mines.

Imagery suggests construction of the camp began in 2006 or 2007.

The committee also published an English translation of the North Korean Criminal Code, which was most recently revised in 2012, the year after Kim took power. It lays out how North Koreans are denied basic human rights and shows a system of punishment “manifestly intended to keep the citizenry in line,” the report said.

The code includes clauses under which a North Korean who, “with anti-state purposes,” takes part in a riot or demonstration can be punished with a life sentence of “reform through labor” or the death penalty. Anti-state “propaganda and agitation” carries at least a five-year sentence, but also carries the threat of death.