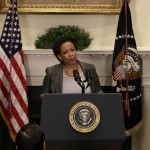 Today, President Barack Obama nominated Loretta Lynch, the U.S. attorney for the Eastern District of New York, for the position of attorney general.

“It’s pretty hard to be more qualified for this job than Loretta,” Obama said.

Lynch, a North Carolina native and Harvard-trained lawyer, is best known for her work in civil rights and corporate fraud cases and would be the first black woman to take the post of attorney general. Eric Holder, the current attorney general, announced in September that he will resign. Read more at the Chicago Tribune.