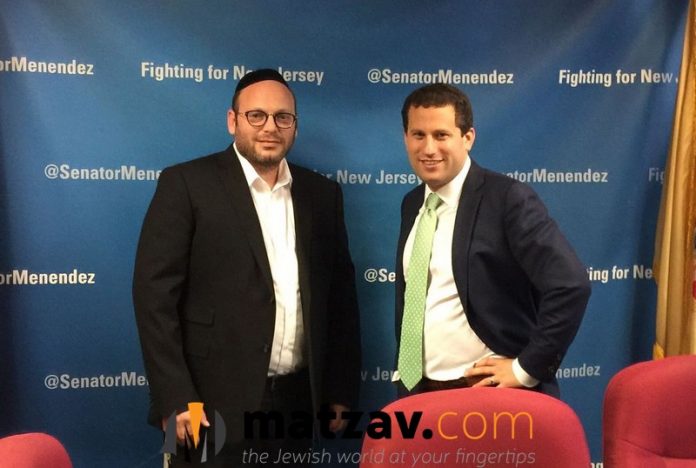 “As we spend our days networking with men and women in communities throughout New Jersey, it is clear that the government has its work cut out to effectively promote economic opportunity,” explains Duvi Honig, Founder and CEO of the Orthodox Jewish Chamber of Commerce. “It is literally a crisis, and we made sure to convey the urgency to those in the halls of power.”

Mr. Honig shares those thoughts as he reflects upon the extensive meeting he, along with Mrs. Devorah Wahl, the Chamber’s Director of Operations, held with Zachary Rynar, Senior Adviser to U.S. Senator Robert Menendez of New Jersey in the Senator’s Newark office.

The Chamber has a longstanding warm relationship with Senator Menendez and other key New Jersey officials. Mr. Rynarlistened intently as Mr. Honig and Mrs. Wahl spoke in great detail about the job creation and economic development needs of communities in New Jersey, which badly lags the national average in these metrics. Mr. Honig shared tidbits of the myriad Chamber and Parnassah Network economic development projects, and how the government can effectively promote similar economic success.

The discussion also tackled the pertinent subject of governmental social programs and how to tailor them to the needs of the contemporary family in the contemporary economy. Residents of New Jersey and other states dream of being self-sufficient, but oftentimes struggle with weaning off dependency.The trio discussed several innovative ideas that would help families reach for greater economic success without being stifled by the fear of a sudden, dramatic loss of government benefits.

Senator Menendez’s office was clearly impressed upon by the discussion, and vowed to immediately undertake concrete action to help people succeed in their business endeavors.

In particular, the Chamber leaders stressed the importance of harnessing the power of networking to help individuals climb the economic ladder. True to its mission, the Chamber is constantly expanding its own networking reach. Mere hours after the Menendez meeting, the Chamber was a co-sponsor at New York City’s first ever all-female City Council candidate forum, which was held in Midtown Manhattan. The forum brought together various powerful groups, including the Greater New York Chamber of Commerce, and NY Sheroes, among other powerful women’s groups.

There was intense networking between the Orthodox Jewish Chamber and the other groups, which was followed by the lively candidates’ forum for the Fourth Council District, a crucial district that encompasses the Empire State Building and other landmarks, a district with unique economic clout and security needs. Mr. Honig served as one of three panelist who graced the forum along with the seven female candidates running for this office. He was joined by Mrs. Odeleya Jacobs, the Chamber’s VP of Business Development and Public Policy, and Mrs. Wahl.Many pressing issues were discussed, with Mr. Honig’s input adding a welcome perspective to the discussion.

These events once again highlighted the key to the Chamber’s success: the breadth and diversity of its networking power. All these positive relationships are being utilized to the benefit of men and women in communities throughout our region, and the world.

A particularly exciting networking event utilizing these relationships is mere weeks away. On September 15th, the Chamber will be hosting the “NYC Business Conference and Expo,” at the New York Hilton in Midtown Manhattan, inconjunction with the Greater New York Chamber of Commerce. This major event offers businesses who target the NYC area invaluable exposure. The event’s business conference features some of the most prominent names in the business world, who will deliver workshops on various important business topics and answer audience questions.

For more information about NYC Business Conference and Expo and/or to make reservations, please visit https://www.ojcnycexpo.com/.