[Links below.] Lag Ba’omer festivities in Meron begin tonight. This year, upwards of half-a-million people are expected to come to Meron to celebrate. The commemoration of Rav Shimon bar Yochai’s yahrtzeit at his kever brings together a combination of time and place of intense holiness. To those blessed to be there on Lag Ba’omer, no other experience is its equal. Little boys who reach the age of three between Pesach and  Lag Ba’omer are traditionally given their first haircut on Lag Ba’omer.

The Ta’amei HaMinhagimnotes that many  people that had difficulty conceiving, finding a shidduch, recuperating from an illness or attaining a livelihood were successful only after they donated “chai rotel” (eighteen bottles, roughly 18 gallons) of wine for the  Lag Ba’omer celebrations at Meron. Rav Ovadia Mibartenura notes the success of this tradition.

Lately, the old tradition of donating 18 rotels of drinks – wine, grape juice, fruit juice, cold soda, or even cold water at the gravesite on the yahrzeit has come back strongly in practice. In olden times, childless couples would donate and themselves serve the drinks to visitors and needy supplicants praying at the ohel.

More than a million visits are made to the ohel regularly, with considerably more than half-a -million on Lag Ba’omer alone. In recent history, this may very well be the single largest annual gathering of observant Yidden anywhere.

Bargain-priced flights left from all over the world to Israel yesterday, in advance of Lag Ba’omer. Bus companies in Israel provide single- and- multiple-day bus tours to Meron, Tzefas, Tiveriah, Amukah, the Golan Heights, Rosh HaNikrah, Pekien, as well as Chevron, Kever Rochel, Masada, Dead Sea, and Ein Gedi. On Lag Ba’omer, there is no such thing as an idle bus in all of Israel.

Tradition has given the Rebbes of Boyan the privilege of lighting the major bonfire on the rooftop of the Ohel structure. This usually takes place at 2:00 a.m. on Lag Ba’omer morning and is considered the highlight of the celebration. This year, the opportunity of providing oil for the Boyaner Rebbe’s lighting was offered by Gomlei Chesed Chassidei Boyan. For $138, the numerical value of hatzlachah, success, one becomes a partner participant in the important event.

This year, as in the immediate years past, security concerns impose some impediments. At one point recently, the security officials in Israel indicated that they would close the ohel to the public without an approved plan for the protection of the huge crowds that will gather there. In addition, much attention is being focused on the relatively narrow road that leads up the hill to the ohel. Traffic on it is at a complete standstill all day. The otherwise five-minute drive literally takes hours, if not all day. Trudging up the mountain road by foot becomes very sensible on Lag Ba’omer. The most important visiting dignitaries, such as the chief rabbis, will be brought by helicopter.

Lag Ba’omer in Meron is invariably a hot day, with temperatures, at mid-day, in the 80s or 90s, compounded by the heat of the immense crowd dancing and singing. Though many bring drinks with them, personal supplies are quickly depleted. In spite of Meron being a highly visited location, it has almost no vending machines. That creates great appreciation for the sponsorship and distribution of drinks. Ohel Rashbi, in addition to offering 18 rotels of wine sponsorships for $150, also offers sponsorship of 18 rotels of cold water for $36 and 18 rotels of cold soda for $80, every last drop of which is drained with profound gratitude.

In addition to the mammoth events on Lag Ba’omer, Ohel Rashbi operates throughout the year, providing refreshments and entire meals to wayfarers, both individuals and groups, who journey to Meron to daven at the holy gravesite.

An inestimably unique event sponsored by Ohel Rashbi takes place a little more than nine months after Lag Ba’omer. The childless couples that came to Meron on the yahrzeit, and were blessed with babies, are invited back to Meron. Many couples, more than ordinarily imaginable, are indeed blessed with the long awaited birth of their first child. Shabbos Parshas Zachor has been designated for this special get-together in Meron to celebrate the miracle of the births. Approximately half of the couples hold the Friday night shalom zachar for sons; the other couples that had daughters celebrate with the Shabbos noon Kiddush. These joyous celebrations are at the initiative of and sponsored by Ohel Rashbi.

The organization also builds the central bimah upon which orchestras and numerous singers provide appropriate inspirational music and song all day long.

This organization will distribute tons of food tonight and tomorrow, including more than 10 tons of meat, thousands of portions of fish, chicken, kugel, and thousands of bottles of drinks. A special order was made this year, as in years past, for more than half-a-million plastic drinking cups. 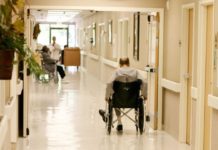