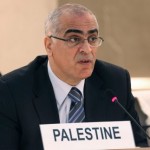 By Aryeh Savir and Yaniv Hassidoff

Palestinian Envoy to the UN Human Rights Council (UNHRC) Ibrahim Khreisheh admitted in an interview, translated by MEMRI (The Middle East Media Research Institute), that the Palestinian Authority and Hamas do not abide by international law and commit war crimes.

Responding to a question presented to him on PA TV last week about the Palestinians’ demand to appeal to the International Criminal Court at The Hague (ICC) against Israel, Khreisheh responded: “The missiles that are now being launched against Israel, each and every missile constitutes a crime against humanity, whether it hits or missed, because it is directed at civilian targets…Therefore, targeting civilians, be it one civilian or a thousand, is considered a crime against humanity.”

Relating to Israel’s mode of operation in Gaza during ‘Protective Edge’ he states: “Please note that many of our people in Gaza appeared in TV and said that the Israeli army warned them to evacuate their homes before bombardment. In such a case, if someone is killed, the law considers it a mistake rather than intentional killing, because (the Israelis) followed the legal procedures.”

Khreisheh further stated that the Hamas, firing from PA controlled areas, does not warn civilians before firing on them and by doing so is committing a war crime: “As for the missiles launched from our side, we never warn anyone about where these missiles are about to fall, or about the operation we carry out.”

The envoy concludes by saying that the PA has no hope of pressing charges against Israel in international courts: “Therefore, people should know more before they talk emotionally about appealing to the ICC.”