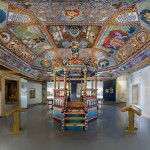 Poland on Tuesday officially inaugurated the POLIN Museum of the History of Polish Jews, which documents the 1,000-year history of Jewish life in the country.

Israeli President Reuven Rivlin (making his first foreign trip as president) and Polish President Bronslaw Komorowski both attended the ceremony, held at a nearby monument dedicated to the fighters of the 1943 Warsaw Ghetto Uprising.

“It is not a museum of the Holocaust, it is a museum of life,” Rivlin, speaking in Hebrew, said at the opening ceremony.

Built with public and private money, the $96 million museum is located the grounds of the former center of the Warsaw Jewish Ghetto and uses state-of-the-art technology, illustrations, and murals to retell the millennium-old history of Polish Jewry.

Poland became a center of European Jewry around the 17th and 18th centuries when Jews, who were forced to flee from Western and Central Europe, were welcomed by Poland’s tolerant leaders. Around 750,000 Jews were living in the Polish-Lithuanian Commonwealth by 1764, growing to 3.3 million by 1939.

Essentially wiped out by the Holocaust and then by communism, Polish Jewry has seen a revival in recent years. An estimated 15,000-20,000 Jews currently live in the country.