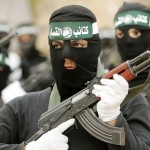 Has he been paying attention?

Pope Francis said it’s wrong to stereotype Islam as a violent religion today, speaking to a group of reporters aboard the papal plane returning from Turkey.

Following a three-day visit that included meeting with Turkish President Tayyip Erdogan, Francis said he understood why Muslims are offended by the notion that Islam is linked to terrorism.

The Pope also urged Islamic leaders to announce a global condemnation of terrorism to help dispel the stereotype perpetuated by the Islamic State. Francis has asked for dialogue between the two religions to help resolve conflict in the Middle East. Read more.