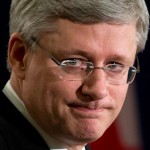 Canada’s leftist New Democrats took a giant leap ahead of rivals in an election campaign, according to polls published Friday, which predict a thumping for staunchly pro-Israel prime minister Stephen Harper and his bid for a fourth Tory government.

Thomas Mulcair’s New Democrats have the support of 33 percent of Canadians surveyed, according to an Ipsos poll, the same figure as a previous poll on August 11.

Backing for Prime Minister Stephen Harper’s Conservatives, meanwhile, has plummeted to 29%, while the Liberals led by Justin Trudeau, the son of late prime minister Pierre Trudeau, moved up to second spot with 30 percent support.

An EKOS poll that quizzed 3,524 Canadians between August 19-25 showed similar results with the NDP scoring 33.6% of the public support, the Conservatives 28.1%, and the Liberals in third place with 26.7%, iPolitics reported.

According to Ipsos, only 29% of those polled agreed that the “Harper government has done a good job and deserves re-election” while 71% believe it is “time for another federal party to take over.”

Earlier polling had the three parties neck and neck coming out of the gate after Harper called for new elections in early August. Voting is slated for October 19.