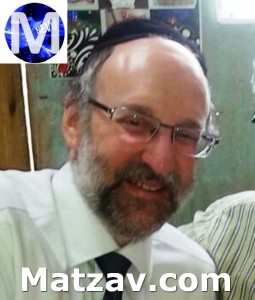 R’ Chaim Yechiel Rothman was still fresh from celebrating the birth of his first granddaughter when he was struck in the head by an axe wielded by a Palestinian attacker.

“He’s lost vision in one eye, they were able to minimize bleeding in the brain, but according to the CT scan there’s been an enormous amount of brain damage,” a relative in Toronto told the National Post. “If he does survive this, his quality of life, we still don’t know,” she added.

Raised in Toronto, R’ Chaim Yechiel graduated from the Community Hebrew Academy of Toronto in 1979 before studying computer science at York University, where he met his wife, Risa.

The couple has lived in Israel for the past 30 years. There, they have raised 11 children, the youngest of whom is 3 years old.

R’ Chaim Yechiel’s mother – as well as most of his siblings – reside in Canada. Last night, family members gathered at the home of the bubby of the Rothman family, Mollie.

In a Tuesday statement to press, R’ Chaim Yechiel’s sister, Shelley Rothman-Benhaim, of Montreal said her brother remains “in a medically induced coma. He was very seriously injured and has already undergone several surgeries due to the attacks to his head, eyes and arms.”

Nine years ago, R’ Chaim Yechiel’s oldest son, Eliyahu Mordechi, was killed at the age of 17 after falling off a cliff while riding his bicycle through the Yerushalayim Forest.

R’ Chaim Yechiel’s has undergone surgery, but he is still in a coma in critical condition and has lost a lot of blood. He needs rachamei Shomayim.

All are asked to daven for Chaim Yechiel ben Malka.