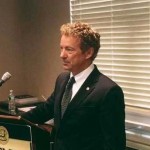 Business Insider reports: As Sen. Rand Paul (R-Kentucky) embarks on his 2016 presidential campaign, Israel will undoubtedly be a delicate issue.

Paul’s past support for ending US foreign aid to all countries, including Israel, and accusations linking his father, former Rep. Ron Paul (R-Texas), to anti-Semitic statements and groups may make it hard for him to attract Jewish voters.

On Monday, Paul confronted what one rabbi described as this “elephant in the room” when he visited Torah Umesorah in Brooklyn, New York and met with Jewish leaders.

The event showed the strategy Paul will deploy as he aims to convince Jewish voters he knows about their faith and concerns. Paul’s pitch to the religious leaders in attendance included a reference to Steven Spielberg’s 1993 holocaust drama “Schindler’s List” and an incredible story about the hora, a traditional Jewish dance.

Before taking questions at the event, Paul, known for his libertarian leanings, made brief remarks where he explained how religion fits in with his vision of American society.

Torah Umesorah is an umbrella group that represents a nationwide network of Hebrew day schools. Paul came to the organization’s office accompanied by a handful of aides and two men who have served as his ambassadors to the Jewish community – Staten Island Rabbi Nate Segal and GOP contributor Richard Roberts.

Segal has shepherded Paul to events with Jewish leaders around the country. According to Paul spokesman Sergio Gor, Segal is a “a friend and an adviser” to the campaign.

Prior to the event, Business Insider attempted to ask Rabbi Zvi Bloom, the executive director of Torah Umesorah, whether he was worried about Paul’s positions on Israel. Segal stepped in.

“I don’t think that there’s a concern,” Segal said.

Segal then attempted to steer the conversation towards an issue that could help Paul win support among the religious Jewish community: school choice.

“This is an umbrella organization of 900 schools across North America,” Segal said. “And the biggest issue to us is, of course, education issues, school choice, things along those lines.”

When Business Insider asked who Segal was, Rabbi Bloom gave his name. Segal again tried to change the subject.

Once Paul arrived, he was introduced by Roberts. The donor acknowledged that, when he first met Paul at the Republican National Convention in 2012, they “disagreed on several topics.”

“Even though we disagreed, I find Rand to be someone of tremendous intellectual honesty,” Roberts continued. “He has a thirst for knowledge and he was just happy to speak to someone who wasn’t just a yes man.”

Roberts subsequently sponsored a trip to Israel that Paul took in January 2013. According to Roberts, this journey helped Paul “refine some of his positions as he gained more information.” Roberts went on to tell another story about an incident that helped familiarize Paul with the Jewish faith. It involved an exclusive Shabbos dinner and the hora, a traditional dance.

“We had a Sabbath dinner for him in the basement of the Plaza Hotel. … We had 11 boys from the Mir Yeshiva there and every five or ten minutes we would – they would start to sing a song, we’d start to dance around the table,” recounted Roberts. “So, when we got to Rand, … Rand had like this little crumpled yarmulke and I said, you know, ‘Stand up!’ So, he figured if I’m telling him to do it, it must be kosher. So, he stands up and I took his hand. I guess he’s not used to dancing with men hand in hand in Kentucky. But anyway, by like the fifth dance, I had my arm around him on one side, another boy on the other side, they were dancing around, he’s enjoying it, and I whispered in his ear, ‘If only your father could see you now!'”

Roberts’ reference to Paul’s father was interesting in light of the fact the donor has bluntly described the elder Paul as “clearly anti-Semitic.” However, it seemed that others at the event, like Roberts, were not holding Ron Paul against his son.

After the event, Ezra Friedlander, an influential Orthodox political operative told Business Insider, “No one’s going to judge the son by the father.”

“Look, you know, when you’re 13 years old, when you become a bar mitzvah, … your father tells you, ‘Now you’re on your own. Until now, my sins are your sins, but now you’re a man on your own,'” Friedlander said.

For his part, Paul credited the dinner and Israel trip hosted by Roberts with familiarizing him with the Jewish faith.

“When I was in Israel and I went to the Shabbat dinner, I love just sort of the traditions,” Paul said. “I see things and I asked Dr. Roberts about ‘Schindler’s List,’ placing a rock on the gravesite, the tradition of sitting shiva, things like that that are important.”

Following those remarks, Paul took questions. The first one came from Rabbi Pinchos Lipschutz, who said Segal invited him to that Shabbos dinner at the Plaza.

“When Rabbi Nate asked me to join the Shabbos, I said, ‘Paul? Are you crazy? He’s an anti-Semite. Didn’t you read about him?’ It’s the elephant in the room, so I’m bringing it up,” Lipschutz said.

However, following the dinner, Lipschutz said he “came to know” Paul and became a supporter. His question was how Paul would overcome the perception that he’s “not a supporter of Israel.”

“How do you explain your position in a way that they will stop writing that you’re an anti-Semite?” Lipschutz asked.

Paul noted he and his team have “tried for a long period of time” to change the public view of his stance on Israel. He also implied some of his rivals have attempted to distort his positions.

“We don’t see it as as much of a problem as it might have been two or three years ago before people knew me. All I can do is keep saying what I believe in and then, ultimately, hopefully, people come to the truth,” Paul said. “Also people have to recognize that people who say things in the media that are your competitors will say things that sometimes aren’t true in order to gain an advantage.”

Paul also pointed out that Jews have differing views on the issue.

“It’s complicated even within the Jewish community,” he said. “There’s a saying about two Jews, three opinions.”

This quip caused several of the attendees to laugh.

Paul then went on to reference his support for a bill that would have cut aid to Palestinians as proof of his Israel bona fides.

Still, after all these arguments, it seemed not everyone in Paul’s audience at Torah Umesorah was convinced.

“Were are you on Israel?” an attendee asked.

Paul then attempted to summarize his position. He argued he has supported Israel even though he ultimately believes the country should be “independent” of US aid.

“I think Israel is one of our best allies and best friends around the world. They’re the only democracy in the Mideast and I’m very supportive. … I think any piece of legislation that’s come forward, I think there haven’t been any that I haven’t been supportive of Israel,” Paul said. “Even on all the stuff that people try to gin up controversy on the foreign aid, I tell people my position is the same as it’s always been. One day Israel should be independent and Israel will have stronger defense when they are completely independent.”

Later in the conversation, Paul went on to detail his positions on other Middle East issues, including the Obama administration’s attempts to negotiate a nuclear deal with Iran. Israeli Prime Minister Benjamin Netanyahu has been a staunch opponent of the the potential agreement. Paul said he is “for negotiation” and “peace as opposed to war.” However, he also said he does not want a “bad deal” and is concerned the Iranians described the terms of the initial framework far differently than their American counterparts.

Paul was also asked about his reputation as an “isolationist.” The senator said he believes the country has recently been too reliant on “interventionism,” which he argued has had “unintended consequences.” Specifically, Paul said, as he has before, that America should not be making efforts to topple secular strongmen in the Middle East.

“Each time we topple a secular dictator, I think we wind up with chaos and radical Islam seems to rise,” Paul said.

Expanding on his point, Paul argued it was a “mistake” to oust Saddam Hussein in Iraq. He also said it would have been a folly to push out Bashar al-Assad in Syria and criticized America’s efforts to help rebels that defeated the regime of Muammar Qaddafi in Libya. Paul blamed this last decision, which he said aided jihadists in that country, squarely on Democratic presidential candidate and former Secretary of State Hillary Clinton.

“Hillary’s war in Libya is, was, and continues to be an utter disaster,” said Paul. “Qaddafi wasn’t a good guy, but he suppressed radical Islam.”

As he left, Paul declined to take questions from the press. However, his strategy for wooing Jewish voters was clear. The first part of Paul’s pitch is his personal efforts to get to know the community. Beyond that, he is attempting to cast his desire to ultimately eliminate US aid to Israel and his reluctance to engage in military conflict in the Middle East as efforts to protect the region from jihadists.

Education is also an issue where Paul may be able to get headway with Jewish voters. He got some of his biggest applause of the day when he answered the one question that wasn’t about the Middle East. The audience clapped when Paul expressed support for policies that provide tax savings to parents who put their children in private religious schools.

Paul’s pitch got mixed reviews from the attendees who spoke to Business Insider. Friedlander, the political operative, said he was “blown away” by Paul’s “nuanced” and “thoughtful” presentation.

“It’s wide open,” Friedlander said. “Rand Paul could still emerge with the lion’s share of the Jewish vote. Everything is open now.”

Michael Fragin, a consultant who hosts the political talk show “Spin Class” on a local Jewish radio station was far less impressed. Fragin said he was “shocked” by Paul’s suggestion we should not have ousted Qaddafi.

“As far as being convinced, personally, I wasn’t,” said Fragin. “I think his views are way outside the Republican mainstream.”