The entire world as we see and live in it today evolved through three individuals Shem Cham and Yafes [9,19]. Each one of Noach’s sons possessed a particular trait which he bequeathed to his descendents and their established cultures, all of which can be traced in their very names. Shem means name, a definition of an object or being.

The Maharal says that the letters of “shaim” share the exact letters of “sham” which means there. It is the shaim of an object that defines the sham the essence of the object itself. It is within Shaim’s descendents that we find the pursuit of the intellect which is the power to define, analyze, deduce, theorize, philosophize, and on a higher level to find meaning and purpose in life.

The crown of Shem was Avraham Avinu from whom descended Am Yisrael whose essential existence is the pursuit of Torah and avodas Hashem. Cham is the contrasting extreme which translates as heat and it refers to the heat of the body and sensuality. Just as the Torah describes the improper conduct of Cham using his body, so too his descendents follow in his path and they answer to the impulse of physical gratification of their bodily cravings Yafes as his name translates beauty, is the medium between gravitation to soul and body. Beauty is the appreciation of aesthetics and symmetry, balance and appeal which was prevalent in the Greek culture descendents of Yafes. These three fundamentals of intellect, beauty and gratification portrayed in the characters and names of Noach’s children, find their roots in the sin of the Aitz Hadaas.

The Torah describes how Chava was seduced to eat from the tree because of these three overpowering elements. ‘Kee tov haeitz lemachal” she had a craving to eat to satisfy her bodily urge, “taavah laainayim”, it was desirable to the eyes from the beauty standpoint, and “nechmad lehaskil”, it was desirable because of the intellectual appeal that could be gleaned from it. All three factors were the catalyst in the first downfall of man.

After the Mabbul, the tikkun could have come from Noach’s three children, each one with their particular mission and fixing as their name suggested. However, it did not happen and the task of correction was given over to the three Avos Avraham Yiztchal and Yaakov. Just as the new world after the Mabbul evolved from three branches Shem Cham and Yefes, each one with their unique fixing of the chait of Aitz Hadaas, so too each individual possesses these three elements to enable him to fix his own world. However, it is of utmost importance that he must utilize these powers solely by elevating them to a higher purpose. One’s intellect should be directed for spirituality, his look on the beautiful and appealing should be used to appreciate the kindness of Hashem and his miraculous unfathomable creation, his body heat channeled to fuel and flame his excitement and passion for Torah and mitzvos. However, if left undirected and uncontrolled, then he will destroy his inner world and the world outside as well. The power of tefilla can help a Yid in this struggle to fix these traits.

The gemarrah says that the word siach means tefilla. It is very interesting to note that this same word siach also means vegetation [2,5]. The connection? Rashi brings the Chazal [2,5] that on the third day of creation although the grass and vegetation were created, they did not emerge upon the earth until Adam Harishon davened for rain. Therefore, we can say that the siach vegetation is called such because it was the siach of tefilla that brought them from the state of mere potential to the state of actualization. Hence, they are the product of siach.

Note here that the acronym of siach are the same letters of the three sons of Noach who symbolize the elements that capitulated Adam into his tragic failure during his first day on earth. This realization brings us to the conclusion that tefillah if done properly can aid us in channeling these faculties into kedusha. This truth is hinted in the Mishna in perek 5 of Meseches Berachos. It states that one must daven with koved rosh. Even if a king asks after his peace one should refrain from answering. Even if a snake wounds around his heel he should not interrupt his shemoneh esrai.

The three situations mentioned in the Mishna, the heavy head, the king, and the snake, symbolize the three elements that can be upgraded through tefillah. The heavy head represents the power of man’s intellect that seeks spiritual connection in contrast to the heavy body where man gravitates towards material fulfillment. The king symbolizes the power of beauty as the passuk says in Yeshaya 23 “melech beyafyo sechezenah ainecha”, that one’s eyes should always see the king as beautiful. The snake symbolizes the cravings and heat of the sensual body as found in the nachash in Gan Eden [Rashi 3,1].

Tefillah is the slot of time and grand opportunity where man can rededicate to Hashem these three foundations of the world cultures within himself. It is of no coincidence that Avraham Avinu took with him the number of 318 gematirah siach to help him in the mission of freeing Lot from captivity from the four mighty kings.

Our Chazal explain that in Lot was the neshama of David Hamelech and Moshiach [descendent from his daughter, Moav and Rus]. The four kings symbolize the four exiles. It is through the power of our tefillos that will eventually bring the geulah and Moshiach. For the source of all exiles stem from the chait of Aitz Hadaas which was caused by the misuse of siach as we just explained. Note that the word Moshiach can also be read maisiach which translates from siach!! We don’t have to look further than our present time to witness how the constant abuse of intellect, the banner of beauty contests and pure hedonism have left an entire world at the brink of utter destruction and colloapse. It is through the medium siach that we can one again hope to achieve that blissful and pure state free from sin when the sovereignty of Hashem will be recognized by all the inhabitants of the earth. 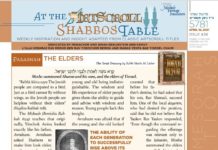 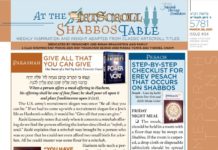 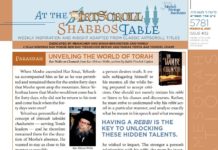