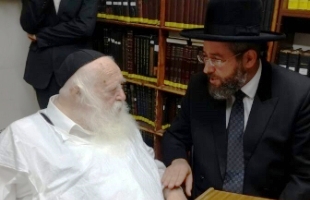 Rav Lau went to consult with Rav Chaim on a number of issues related to the upcoming Shmittah year. During a lengthy conversation, he received a number of halachic rulings from Rav Chaim on the subject.

During the meeting, Rav Chaim told Rav Lau, “I daven three times a day for the kidnapped boys.”

Rav Chaim took a note out his pocket and showed it to the chief rabbi. On the note appeared the names of the three boys and their mothers.

Last night, Rav Chaim celebrated the marriage of a grandson, a son of his son, Rav Yitzchok Shaul Shaul Kanievsky, to a granddaughter of Rav Avigdor Nebenzahl, rov of the Old City of Yerushalayim.