By Jameel @ The Muqata

A pair of scholars are convinced that the graves were located on the Arbel — Yaakov’s children – Reuven, Shimon and Levi and their sister Dinah. Israel Hertzberg, an Orthodox Jew from Jerusalem, and Yossi Stepansky, formerly a senior archaeologist for the Northern District of the Israel Antiquities Authority conducted a study that lasted 11 years and included collecting and validating records of the sources of 120 pilgrims’ journey logs from the past 200-1000 years.

They were entitled to investigate rare documentation at Israel’s National Library at the Hebrew University in Jerusalem, where they found documents and dates of visits to the tombs by Jewish tourists. Joining their research was Israel Meir Gabbai, Chairman of “Ohalei Tzaddikik” or organizations which deals with rebuilding tombs and their research was approved by the chief Sephardic rabbi of Israel, Rabbi Shlomo Amar.

“In the Writings of the Ramban and in all the ancient travel diaries of pilgrims, they described the same path of visiting the graves of Reuben, Simeon, Levi, their sister Dinah, and even of Seth, Adam and Eve’s child,” said Israel Herzberg — the journey went from the grave of Nabi Shuaib to the Arbel [mountain].

In journals, its describe how the graves of the righteous see the magnificent high synagogue, and the tombs are North of the ancient village, where the synagogue is located in the center.

According to records there is a cave with stairs leading down it it,to the grave of Seth and he was near the tombs of the tribes in the field which have large markers. Pilgrims describe Dinah’s grave as having a myrtle/Hadas bush growing out of it.

Since in the modern era, that area is not plowed, it took us six years to find the graves. When we arrived we were amazed to discover in the cave, the Hebrew names of these pilgrims were engraved, dating back some 600 years ago.

I was rather skeptical of this discovery, so I went to the authoritative book on graves in Eretz Yisrael, the 2 book compendium “Holy Graves in Eretz Yisrael” by Israel Prize Winner, the noted geographer Ze’ev Vilnai (first edition, 1951. I use the third edition from 1985)

He notes the following; Page 88:

In the middle ages, Jews showed the grave of Shet, in the area of Tiveria, near the ruins of ancient Arbel. The pilgrim, [Rabbi] Shumel Ben Shimson who visited the area in 1210, writes about “the tomb of Shet, which we saw.” In this same area, Rabbi Yaakov Ben Netanel HaCohen passed through and wrote: “And one marker was built like a house, memorializing Shet the son of Adam, and there is a well inside the house.” The Ramban’s student also went through that area in the early 14th century and writes about holy graves in the area of the Arbel: “And near there is another tzaddik’s [righteous person] and a water pier flows over his grave, and is covered with sand and a building, and the water falls as if from a waterfall into a well in the building, and they say that is Shet the son of Adam.” In another list of holy graves, the Arbel is mentioned as “Arbelata”: “On the western side, Shet the son of Adam is buried, and near his grave is a large myrtle tree.” The ruins of ancient Arbel are known to us today in the Arabic as “Irbid.” Near them are the new settlements of Arbel and Kefar Hittim. In the entire area of the Arbel, there are no findings of any marker or grave of Shet the son of Adam.”

When Vilnai researched his book in 1951, and then in the second and third publications of it, the house with the well had not been found.

Regarding Dina, he wrote on page 220:

“The Jewish tradition for the burial place of Dina, the daughter of Yaakov is in Israel” According to our sages, “Shimon [her brother] took her bones, and buried her in the land of Cna’an” [Breisheet Rabba 80:11] Jewish Pilgrims in the Middle Ages were shown her grave in the area of Tiveriya, at the Arbel, which is near Moshav Kefar Hittim. The Ramban in his explanation of the Torah writes: “And her [Dina’s] grave is know to this day through Kabbala, and it is in the city of Arbel…and its possible that Shimon mercifully brought up her bones [to Israel for burial] or the children of Israel brought her with all the the bones of the tribes [sons of Yaakov] as was mentioned by our Rabbis.” [Ramban, Breisheet 34:12] Also Rabbi Yaakov Ben Netanel HaCohen passed through the area in the end of the 12 century and mentioned her grave. A student of the Ramban, who visited the area at the beginning of the 14th century wrote: “And near the Arbel are 3 of the tribes of Yaakov and their sister Dina. Next to the grave is a large, nice myrtle tree, and no one is allowed to take a branch from it – neither Jew or Arab, lest they be punished.” In the list of the Holy Places, Arbel is mentioned, “Arbalata…to the North are buried 4 of the tribes…including Dina the daughter of Yaakov, and all the graves are covered with large stones, and how is it possible than a man could have moved those stones?” [implying the stones are very large and heavy].

Today there are no signs of these graves, tombs or markers in the entire Arbel area…which is now called “Arbid” which has a nice, large ruin of a Beit Knesset, though any remains of graves or markers have vanished.”

This appears to corroborate the discovery of the researchers.

1. Though written about centuries ago, the cave building / waterfall / well which is the traditional burial place of Shet, was not found till recently by the researchers. Vilnai knew it was written about but no one knew where it was.

2. The manuscripts of the Jewish pilgrims who wrote about the burial place of Shet, Dina and the other tribes were reviewed by the researchers, who found the names of the pilgrims and the dates they were there in the cave building which is ascribed to Shet, thereby corroborating it being the correct place.

3. The myrtle tree and large stone coverings of the graves match the document’s brought by Vilnay.

So…it could very well be that based on the texts quoted by Vilnai, the researchers have indeed located the grave sites mentioned by the Jewish pilgrims and rabbis of the 12th-14th centuries. 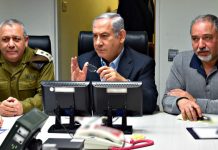 Netanyahu: ‘Whoever Doesn’t Want Me As Prime Minister Should Vote’ For Lieberman 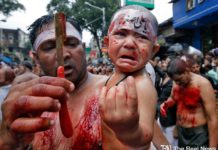 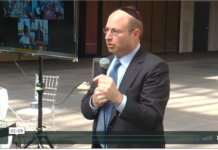