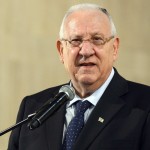 In a pointed interview with Maariv to be published Friday, Rivlin said that “the Prime Minister is managing the issue with the U.S. as if we are equals. This could hurt Israel.”

In Israel, the president’s job is ceremonial and administrative, and Rivlin says in the interview that he does not mean to criticize Netanyahu. “I must say that he understands matters relating to the United States much better than I, but I also must say that we are, on this issue, very isolated in the world.

“When there is prime minister and a president in two democratic countries that dig in on an issue like this, it is very worrying,” said Rivln. “I am not among those who usually become hysterical, but for the first time I see we are isolated.”