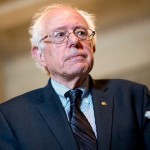 Sen. Bernie Sanders has opened a nine-point lead over fellow Democrat Hillary Clinton among party supporters in New Hampshire, according to an NBC News/Marist Poll released on Sunday.

The survey showed that 41 percent of Democratic voters would back Sanders while 32 percent would cast a vote for Clinton if the poll were held today and Vice President Joe Biden were on the ballot.

Support for Biden, who has yet to decide whether to run after the death of his son Beau in May, was at 16 percent.

Draft Biden, a group urging him to put his name forward, said the poll showed “a deep desire among Democratic primary voters to have Vice President Biden join the Presidential race.”

In July, Sanders had 32 percent support while Clinton had 42 percent backing in the same poll.