Rav Aharon Teitelbaum of Satmar on Pesach compared the behavior of Israeli legislators who passed a conscription law to draft yeshiva bochurim to the behavior of Nazis during World War II.

“Just as we were saved from the Holocaust and the Nazis, so will we be saved from army service,” Rav Aharon said.

On the Leil HaSeder, when the Rebbe began the paragraph of Vehi Sheamdah, he told those at his Seder: “When my father was in a labor camp during the Holocaust, there was a Nazi guard who liked to get high and get drunk. Using a single bottle of wine, they could bribe him, and when he imbibed, the Jews had some respite. And not only when drinking wine…but even when they spoke to him about wine, he began to feel elated and they had relief.

“This is perhaps why,” continued the Rebbe referring to the events of recent times, “we raise our glasses while saying Vehi Sheamdah, to express that just as this cup stood by our forefathers to save them from trouble during the Holocaust, today as well, when the wicked in Israel want to subject Jews in our Holy Land to army enlistment, Hashem will save us from them.”

Also over Pesach, the Rebbe addressed another matter.

“Today there is a disease,” said the Rebbe at a gathering of his chassidim on Thursday. “The disease is called the Smartphone. It is a curable illness. This disease has already caused a lot of problems in the home and in raising children. It enslaves the human.” 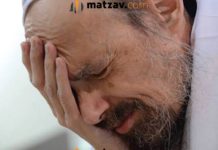 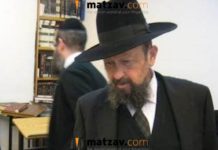