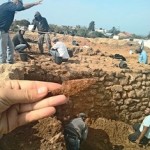 Archaeological excavations in Netiv Haasarah have uncovered a Persian era military installation. Netiv Haasarah is a town in the “Gaza envelope” with a population of about 700. The dig, being headed by Dr. Yael Abadi Rice, found a fortified town and a military tower, from approximately 2,100 years ago. This time period was when the Second Temple was standing in Jerusalem.

“It seems this was a military outpost”, Dr. Rice told Tazpit News Agency. “Besides for the army stationed there, people were sent there to work the area on the road from Ashkelon to Gaza.”

The outpost had the military tower as well as residential buildings and warehouses. The tower, built of limestone and mud bricks, was found with a partially preserved staircase. Inside the warehouses, archeologists were surprised to find intact pottery and stone utensils, as well as oil and wine jars.

“The site shows the military being pushed back. It seems they ran away in a hurry, as they left everything behind,” Dr. Rice explained.

Both the town and the tower were destroyed in a violent fashion. A layer of ash shows they were burnt.

The dig is being done to prepare a parcel of land for a new neighborhood in the town. It was particularly hard hit by rocket fire during Operation Protective Edge. “It is truly nice to see that despite the wars here, people keep coming back here to rebuild, and to live,” said Dr. Rice.