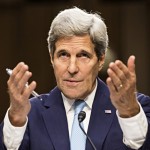 Secretary of State John Kerry clearly believes — or wishes to be heard saying — that Israel is responsible for increased terrorism and instability roiling the Middle East.

In a recent speech at a White House ceremony for the Muslim holiday of Eid al-Adha, Kerry said that “there wasn’t a leader I met with in the region who didn’t raise with me spontaneously the need to try to get peace between Israel and the Palestinians, because it was a cause of recruitment and of street anger and agitation that they felt.”

Kerry did not repudiate this claim, thus lending credence to it. Yet, when he was criticized for recycling it, the State Department spokeswoman Marie Harf denied that he had done so.

Yet Harf’s flat-earth denial clears up nothing. It certainly does not account for Kerry publicly recycling the morally idiotic or anti-Semitic idea that the Islamic State (IS) is murdering Christians and Muslim enemies and seizing vast tracts of Iraq and Syria because Israeli/Palestinian peace is elusive. When Kerry repeats these claims without comment or critique, he amplifies them.

The claim that the absence of an Israeli/Palestinian peace settlement is a force-multiplier or cause of jihadist recruitment in various Middle Eastern conflict is patently absurd. Considering that all radical Muslim organizations loudly proclaim their desire to see Israel utterly destroyed, the idea that an Israeli/Palestinian peace could tranquilize the situation is nonsense.

The Arab war on Israel is unrelated and irrelevant to the present bloodshed in Syria, Iraq and elsewhere. If Israel didn’t exist, the same problems between and within Arab countries would still exist, as has also been the case historically.

The only connection between various recent claims of Israeli corrosive impact on the region is that they tend to be made by John Kerry.

In February, Kerry said in a speech delivered in Munich that, should Israeli/Palestinian talks then in prospect fail, boycotting and isolating Israel would be both inevitable and understandable. The clear implication of his remarks was that Israel would be held responsible. Kerry could have said that the U.S. would utterly oppose all such boycotts and reject blaming Israel, but he didn’t: a strong signal that the U.S. would not support Israel.

Then, in May, Kerry said in remarks to the Trilateral Commission that Israel is becoming an apartheid state, a statement that all but justified the Palestinian violence, international boycotts and delegitimization. Kerry could have placed blame for the absence of peace where it belongs — on a Palestinian partner which refuses to accept Israel’s permanence and legitimacy as Jewish state. Instead, he chose to essentially defame Israel before the world as a rights-abusing state fit to be a pariah — then denied he had said or meant any such thing.

In short, Kerry is making a habit of uttering statements hostile to or blaming Israel, while offering denials or seeming retractions to shirk any responsibility and domestic political cost for having made them.

When coupled with the recent revelations that, extraordinarily, the Obama Administration cut off resupply of Hellfire missiles and FBI assistance to Israel in locating an Israeli soldier seized by Hamas during the recent Gaza war, a pattern of pressure and intimidation emerges that negates the White House’s public proclamations of comprehensive cooperation and having “Israel’s back.”

What else can lie behind the Administration’s refusal in recent days of meetings with Kerry, Vice-President Joseph Biden and National Security Adviser Susan Rice for visiting Israeli Defense Minister Moshe Ya’alon?

Moreover, reports indicate that the Israeli government is even anticipating that the U.S. will abandon it in the Security Council early next year, withholding its veto when the Palestinian Authority is expected to attempt to circumvent a negotiated peace and seek admission as UN member state.

When the Obama Administration pressures Israel, withholds arms and intelligence in mid-war, cold-shoulders the Israeli Defense Minister and holds Israel accountable for the lack of Israeli/Palestinian peace, one can only conclude that John Kerry’s baseless pronouncements as to Israel’s character, direction and allegedly corrosive influence on the Middle East serve the same purpose of pressure and intimidation. Seemingly by the week, the evidence mounts that the Obama Administration is the most hostile to Israel since its founding.