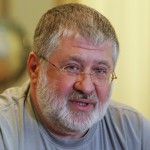 In a desperate scramble for reinforcements, supporters of the flagging Ukrainian insurgency have turned to a Kabbalistic curse against the uprising’s No. 1 enemy, The Moscow Times reports.

Dnepropetrovsk Governor Ihor Kolomoisky has become the target of the Pulsa Denoura, citing a rebel in the insurgent-held city of Horlivka. The klalah is intended to visit heavenly retribution upon a foe, leading to their death within six months, and is considered to be among the harshest klalos of Kabbolah.

Kolomoisky, an ethnic Jew, had not commented on the report. The billionaire governor has turned his domain in central Ukraine into a hotbed of anti-separatism and has used his considerable wealth to fund forces fighting the insurgency. So far, money has trumped magic in Ukraine, where the Army recently began to overpower the outnumbered rebels after a string of setbacks.