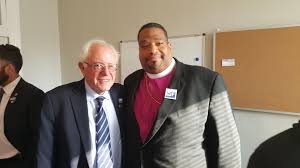 A Philadelphia bishop is accusing the President Trump of attempting to implement “ethnic cleansing” through proposed budget cuts designed to shrink the federal government.

“This budget, if I can be honest with you, is an attempt to implement ethnic cleansing in this nation from people of color, but also poor white folk from whom services being but will be impacted the most,” Bishop Dwayne Royster said at a Wednesday social justice rally broadcast by ABC News.

The bishop, who heads Philadelphia’s Living Water United Church of Christ, went on to explain that Trump’s overarching goal is to drive people into poverty by giving their money to rich folks. Read more at American Mirror.