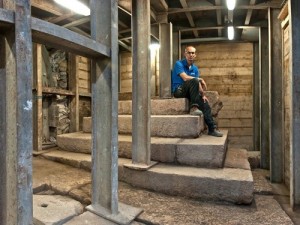 Archeologists discovered a flight of stairs in the shape of a pyramid that is 2,000 years old in Yerushalayim’s City of David National Park. The stairs were likely used by Jewish pilgrims on the way to the Second Bais Hamikdosh.

The Israeli Antiquities Authority, the Nature and Parks Authority and the City of David Foundation discovered the stairs on the side of an ancient road from the same period. The stairs were also found to lead to an unusual podium, which may have been used to draw the attention of passersby.

“The structure exposed is unique,” said archaeologists Nahshon Szanton and Dr. Joe Uziel, the directors of the dig.

“To date such a structure has yet to be found along the street in the numerous excavations that have taken place in Jerusalem and to the best of our knowledge outside of it. For this reason, its exact use remains enigmatic. The structure is built along the street in a place that is clearly visible from afar by passers-by making their way to the Temple. We believe the structure was a kind of monumental podium that attracted the public’s attention when walking on the city’s main street. It would be very interesting to know what was said there 2,000 years ago. Were messages announced here on behalf of the government? Perhaps news or gossip, or admonitions and street preaching – unfortunately we do not know,” they said.