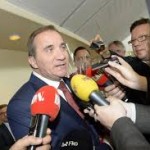 Sweden today officially recognized a Palestinian state, with Foreign Minister Margot Wallstrom saying that the “criteria of international law” have been met because there is “a [Palestinian] territory, a people, and government.”

New Swedish Prime Minister Stefan Lofven had supported a Palestinian state earlier in October, but Swedish Ambassador to Israel Carl Magnus Nesser at the time attempted to walk back the prime minister’s comments by saying that such recognition would only follow extensive Israeli-Palestinian peace talks. Yet that is not the case with Sweden’s latest announcement on the issue.

“The Swedish government needs to understand that relations in the Middle East are more complicated than a piece of furniture from IKEA that you put together yourself, and it should act with responsibility and sensitivity,” Israeli Foreign Minister Avigdor Lieberman said.