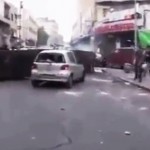 By Moshe Phillips and Benyamin Korn

Israel’s critics in the news media and the punditry are up in arms about a video that supposedly shows an Israeli policeman shooting a young Arab man without justification. They’re misrepresenting what that video shows–and refusing to mention a second video, which reveals vicious and unprovoked Arab violence against Jews.

The Associated Press is already teeing up the police shooting incident as being somehow to blame for mass Arab violence in Israel in the past few days. The “angry protests” came “after video footage showed police fatally shooting a 22 year-old Arab as he appeared to be retreating.”

Trying hard to discredit any possibility that the policeman was justified, the AP said the Israeli police “said officers opened fire against knife-wielding man trying to stab officers. Security camera footage from an unknown source later appeared to portray a different story: A man repeatedly bangs on the window of a police vehicle. When officers emerged to confront him, he begins to retreat and is shot.”

In fact, the security camera footage does not show “a different story.” It confirms exactly what the police said. See for yourself HERE.

A knife-wielding Arab man runs straight at the Israeli police vehicle, completely unprovoked. The car stops to avoid hitting him. He tries, but fails, to break through the front passenger side window with his knife. A police officer in the back seat tries to open the door to get out. The Arab tries to slash the officer through the opening. He pulls the door closed. The Arab steps back, weapon in hand. The police officer emerges, with his gun drawn. The Arab does not surrender. He doesn’t put his hands up. He doesn’t drop his weapon. He takes a couple of steps away from the policeman, who fires.

No reasonable person could fault the police officer. He has just been attacked by a terrorist who is still wielding a deadly weapon and is making no move to drop his weapon or surrender. His choice is to shoot him, or wait for the Arab to try again to stab him to death.

That’s the video that Israel’s critics will be citing, in their latest crude attempt to blame Israel for provoking Arab violence.  Now here’s the video they won’t be talking about.

Apparently filmed in the last few days, it shows an Israeli civilian automobile, driving slowly down a street in an Arab neighborhood, possibly Jerusalem. Then the car is partially blocked by a construction barrier, and is comes almost to a stop. With their prey at its most vulnerable, the attackers strike.  Out of nowhere, for no reason, with no conceivable provocation, an Arab hurls a rock at the car from close range. Then a second Arab joins in. Then a third.

Undermining the stereotype of rock-throwers as juveniles who are just clowning around, a very nicely-dressed Arab man, with a smart sweater vest and apparently freshly-creased white pants, joins in the mob attack.

They’re not skipping stones. They’re not throwing pebbles. The rocks are large. They are meant to kill. One of the first rocks shatters the entire back window of the car. If somebody had been sitting in the back seat, he or she would probably be dead.

Another attacker run up to the side of the car and does a leaping two-footed kick at the rear passenger side window. Fortunately, the glass holds. He then repeatedly strikes the window with some object, probably an iron bar. The driver then drives onto the sidewalk, in order to get around the barrier and escape. The attackers scatter, possibly as the passenger points a gun at them.

See for yourself HERE.

Imagine what would have happened if the passenger fired–and if one of the attackers had been hit as they scattered. The Associated Press would declare that the Arab was shot “while retreating.” The “moderate” Palestinian Authority would brand the rock-thrower a “heroic martyr” and the shooter “a racist Zionist settler.” The State Department would express its “concern” about the shooting (not about the stoning). And some nervous American Jewish leaders would probably quietly urge the Israeli government to prosecute the shooter and offer other “gestures” to “ease tensions.”

None of that will happen, however, thanks to one thing: the Arabs’ bad aim. If one of those dozens of rocks had hit the driver, causing the car to crash, the mob would have pulled the two Jews from the car and lynched them. That’s what frenzied mobs do. And that would have made it impossible for the news media and all the rest to rationalize their violence. But thanks to bad aim, the car escaped, the Jews survived, and the videotape of their near-death experience will not be mentioned by any of the mainstream media, as if it never happened. That’s the price Israelis pay for living.