WATCH THE VIDEO OF RAV SCHEINER ADDRESSING THE EVENT HERE:

Rav Scheiner, who had not stood up to address a public audience in several years, overcame tremendous weakness and fragility to offer brief words of brocha to those who had come out to assist him in shouldering the staggering budget of his famed yeshiva back in Yerushalayim.

“I just want to express from depths of my heart a thank you to all of you who have come,” Rav Scheiner said in Yiddish. “Thank you for exerting yourself for me. May the Aibishter bentch you with all the brachos ad beli dai.”

Rav Scheiner stepped away, as the thousands in attendance watched in awe.

And then, quite suddenly, the crowd broke out into spirited singing of “ki orech yomim” in honor of the rosh yeshiva.

That Rav Scheiner made a trip to the United States at this point, despite his ill health, is itself extraordinary.

And the fact that he carries such a mammoth financial burden on his shoulders at this stage of his life is mind-boggling.

The name “Kamenitz” to which Rav Scheiner is so connected is synonymous with the glory of the pre-war Lithuanian yeshiva world. Just uttering the name immediately brings to mind the image of the great rosh yeshiva, Rav Boruch Ber Leibowiz zt”l, who reared generations of Torah leaders and instilled in them love of Torah and a desire to grow in Torah and disseminate it. It was these lofty students of Rav Boruch Ber who replanted the yeshiva world on the shores of America and Eretz Yisroel after the war and ensured that the legacy of Rav Boruch Ber would be perpetuated for future generations.

The Kamenitz Yeshiva itself was reestablished by Rav Boruch Ber’s children in Yerushalayim and, over 50 years ago, found a home in the heart of the Ihr Hakodesh on Rechov Yechezkel. From the campus on Rechov Yechezkel, under the leadership of Rav Scheiner, the sweet sounds of Torah study reverberate day and night, as hundreds of talmidim sit immersed in the limud haTorah that personifies Kamenitz. Over the decades, thousands of talmidim – both native Eretz Yisroeldikers and young men from throughout the Diaspora who traveled to Eretz Yisroel to bask in the unique atmosphere of Kamenitz – have learnt on this campus and gone on to be marbitz Torah worldwide.

Today, the ruchniyus in the yeshiva continues to be on the highest level. Rav Scheiner himself is American-born, a talmid of Rav Shlomo Heiman and Rav Shraga Feivel Mendlowitz at Yeshiva Torah Vodaas of the 1940s. Rav Scheiner’s peers from his time in Torah Vodaas included the nucleus of great men who went on to build the yeshiva world in America. Although Rav Scheiner himself eventually moved to Eretz Yisroel and became rosh yeshiva of Kamenitz upon the passing of his father-in-law, Rav Moshe Berenstein zt”l, son-in-law of Rav Boruch Ber, he always maintained his close connection to the American yeshiva world and is often in contact with the leading American roshei yeshiva, who seek his sage advice and guidance. Thus, Rav Scheiner, who is also a member of the Moetzes Gedolei Hatorah of Eretz Yisroel, is a leading Torah figure for the yeshiva worlds both in Eretz Yisroel and in America.

Several years ago, after the physical conditions of the Kamenitz buildings on Rechov Yechezkel deteriorated greatly, Rav Scheiner undertook a mammoth project to complete a beautiful new building at Rechov Yechezkel 22, in the heart of Yerushalayim. It is a breathtaking structure in the center of Yerushalayim that houses a spacious bais medrash, as well as a state-of-the-art dormitory with hundreds of beds, many shiur rooms, and every other amenity a talmid needs to help him grow in Torah and ruchniyus.

The construction was made possible through the support of generous donors, who, hearing about Rav Scheiner’s dream to erect a fitting new home for the yeshiva, notified the rosh yeshiva that they were eager to partner in this project.

During the construction project, however, with the focus on the yeshiva building, the budget of the day-to-day operations of the yeshiva suffered. In fact, the yeshiva is now $1.2 million in the red and the burden on the shoulders of the rosh yeshiva is enormous.

But the talmidim of Yeshivas Kamenitz – thousands of alumni in Eretz Yisroel and across the Diaspora – are intent on not letting Rav Scheiner down. They launched a campaign to rescue their beloved yeshiva, with a massive asifa recently held in Eretz Yisroel, followed by the historic event held last night at Bell Works, in conjunction with a Charidy campaign, so that all avenues are being maximized in an effort to address the yeshiva’s staggering shortfall.

Rav Yitzchok Sorotzkin, rosh yeshiva of Mesivta of Lakewood and Telshe, remarked that those present in the room who had learned in Kamenitz were not just alumni of the yeshiva, but bonim – true children – of the rosh yeshiva, who worries about them and their welfare like a caring and loving father. He described Rav Scheiner as a connection to his legendary zaide, Rav Boruch Ber, and noted that Rav Scheiner cannot leave these shores until all the needed funds have been raised.

Rav Naftali Gefen, a renowned marbitz Torah and a maggid shiur at Kamenitz, stressed the power of the rabbim at this juncture.

In the name of Rav Scheiner, he related that “with yichud lev – unity of purpose – we can accomplish unbelievable things and can achieve a goal,” as daunting and colossal as it might be.

Prior to coming to America for this event, Rav Gefen spoke in Eretz Yisroel, where he said, “This is an effort to rescue Kamenitz from total collapse in a very literal sense. This difficult and severe situation is unlike any the yeshiva has ever experience before.”

Following Rav Gefen’s remarks last night, a video was shown, depicting the beauty and scope of Kamenitz Yeshiva, which, today, has thousands of proud alumni, who have been asked to step up and assist the yeshiva hakedosha at this crucial time.

Indeed, at the event, as Rav Scheiner concluded his remarks, talmidim, supporters and admirers flooded the dais, handing in pledge cards with generous contributions, with many people going above and beyond their means, understanding the importance of coming to the yeshiva’s aid at this time.

It is the sincere hope of the rosh yeshiva and his talmidim that more and more individuals will earn a share in coming to the aid of the Kamenitz Yeshiva at this crucial stage, recognizing Kamenitz as the bearer of the shalsheles haTorah, the institution that carries the torch of the exalted world of the prewar Lithuanian yeshivos and is transmitting this legacy to the next generation. 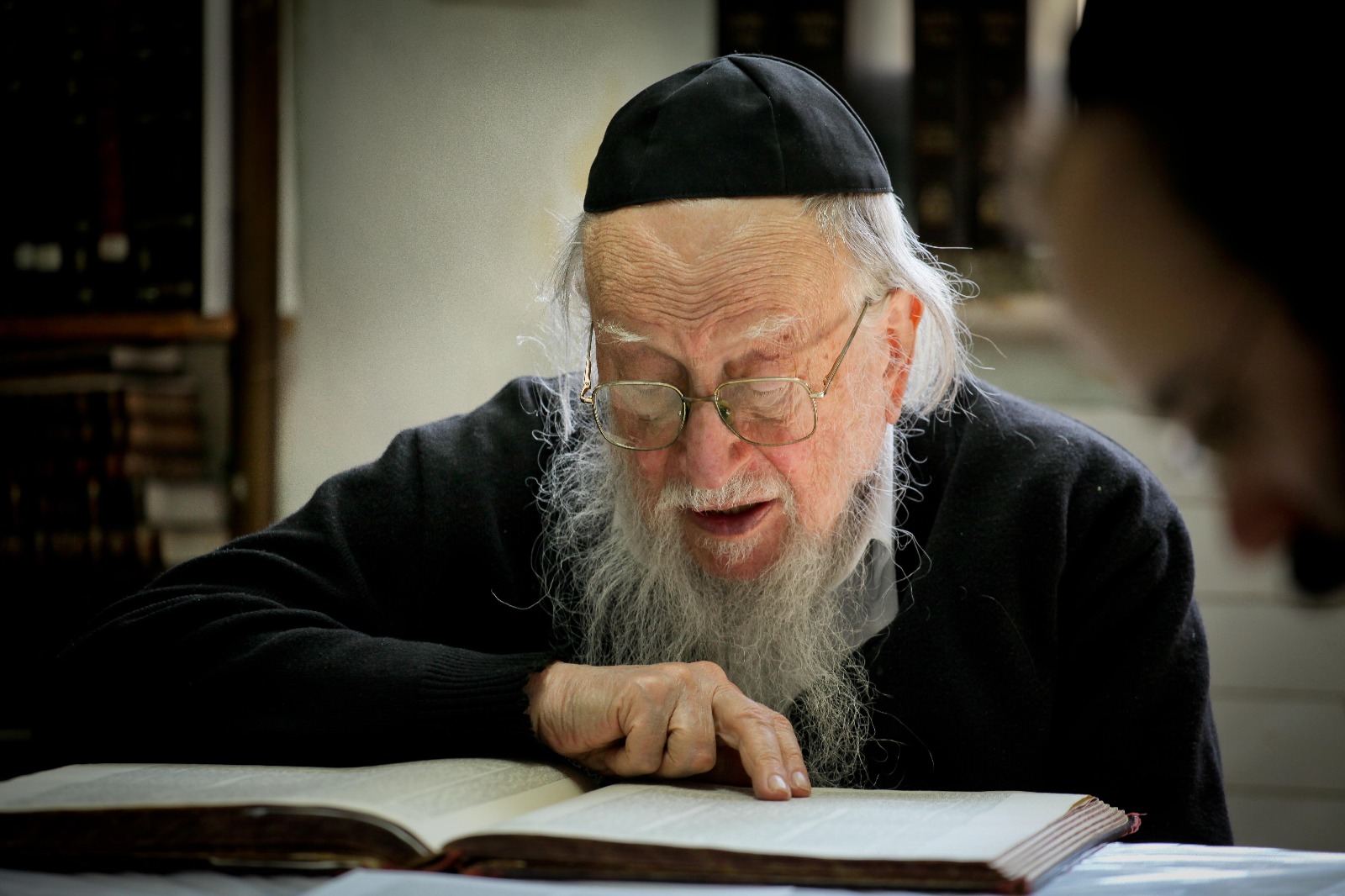 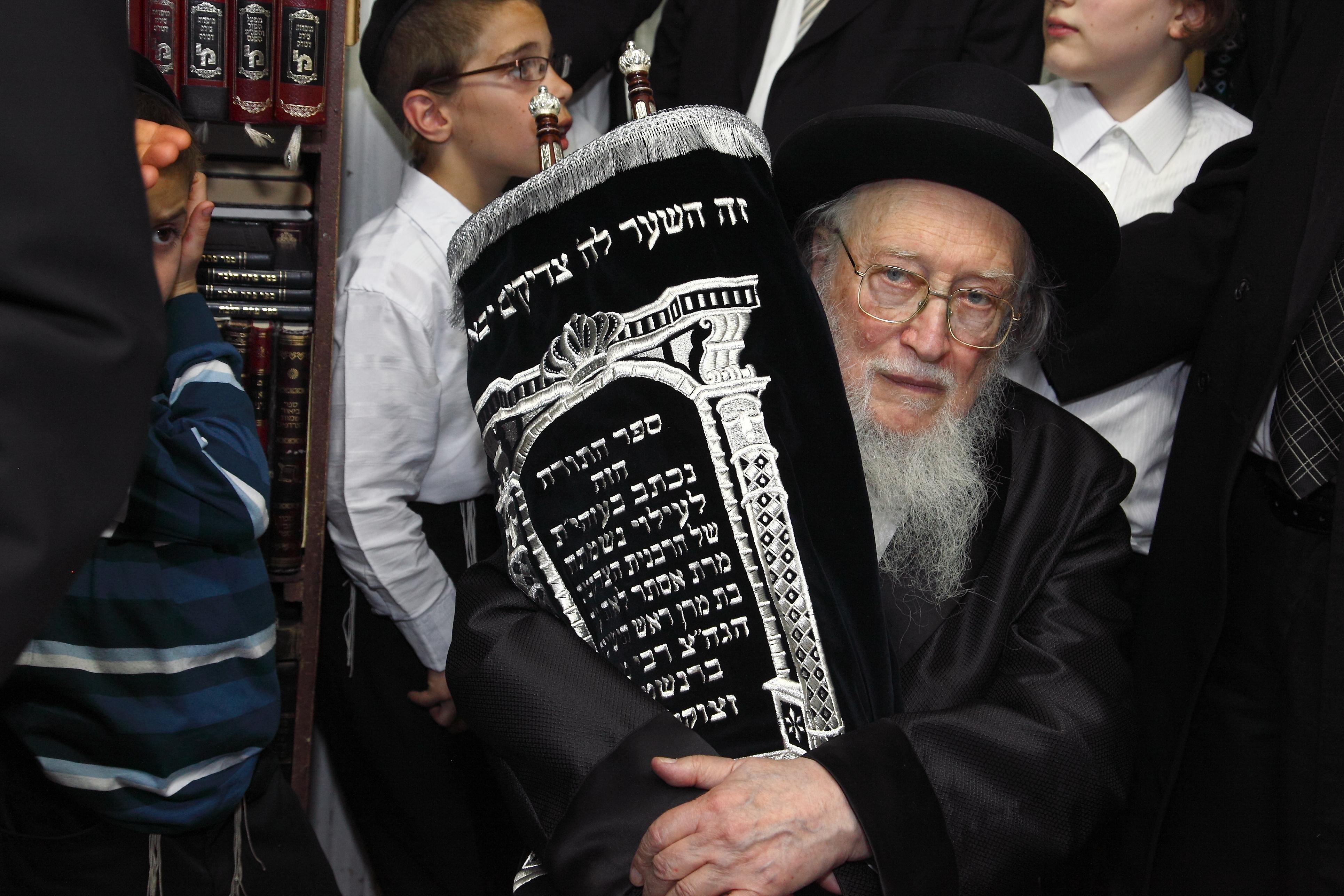 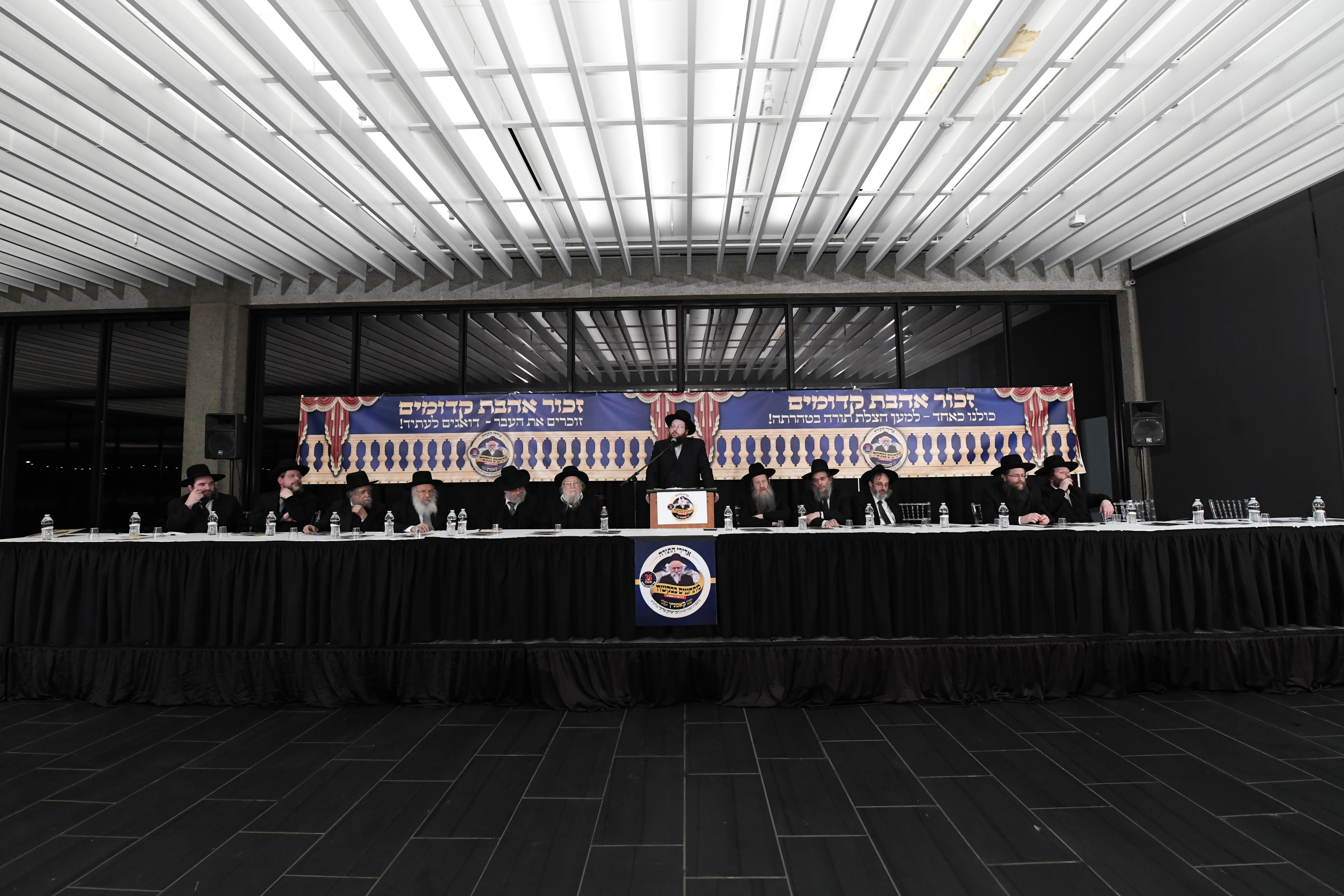 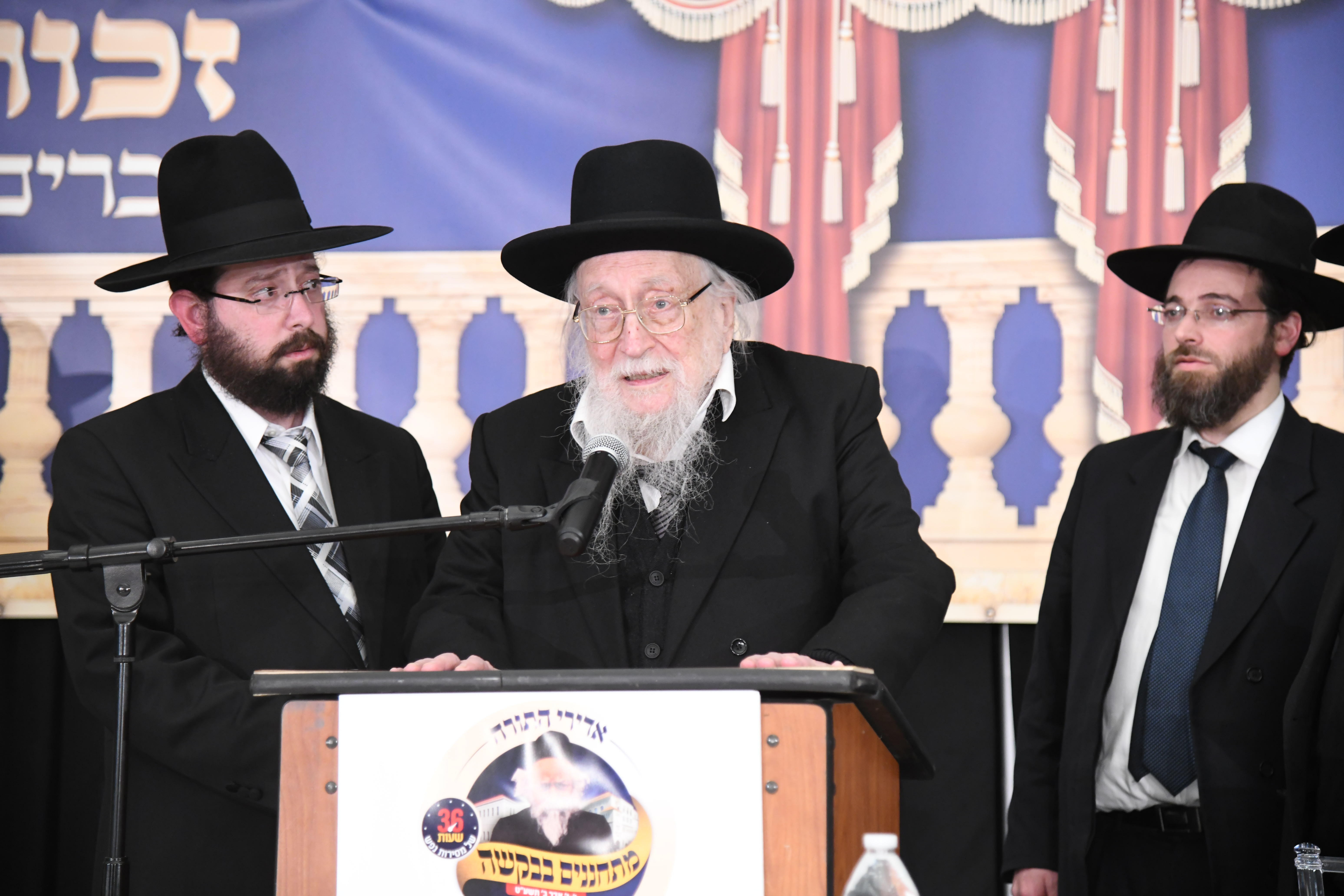 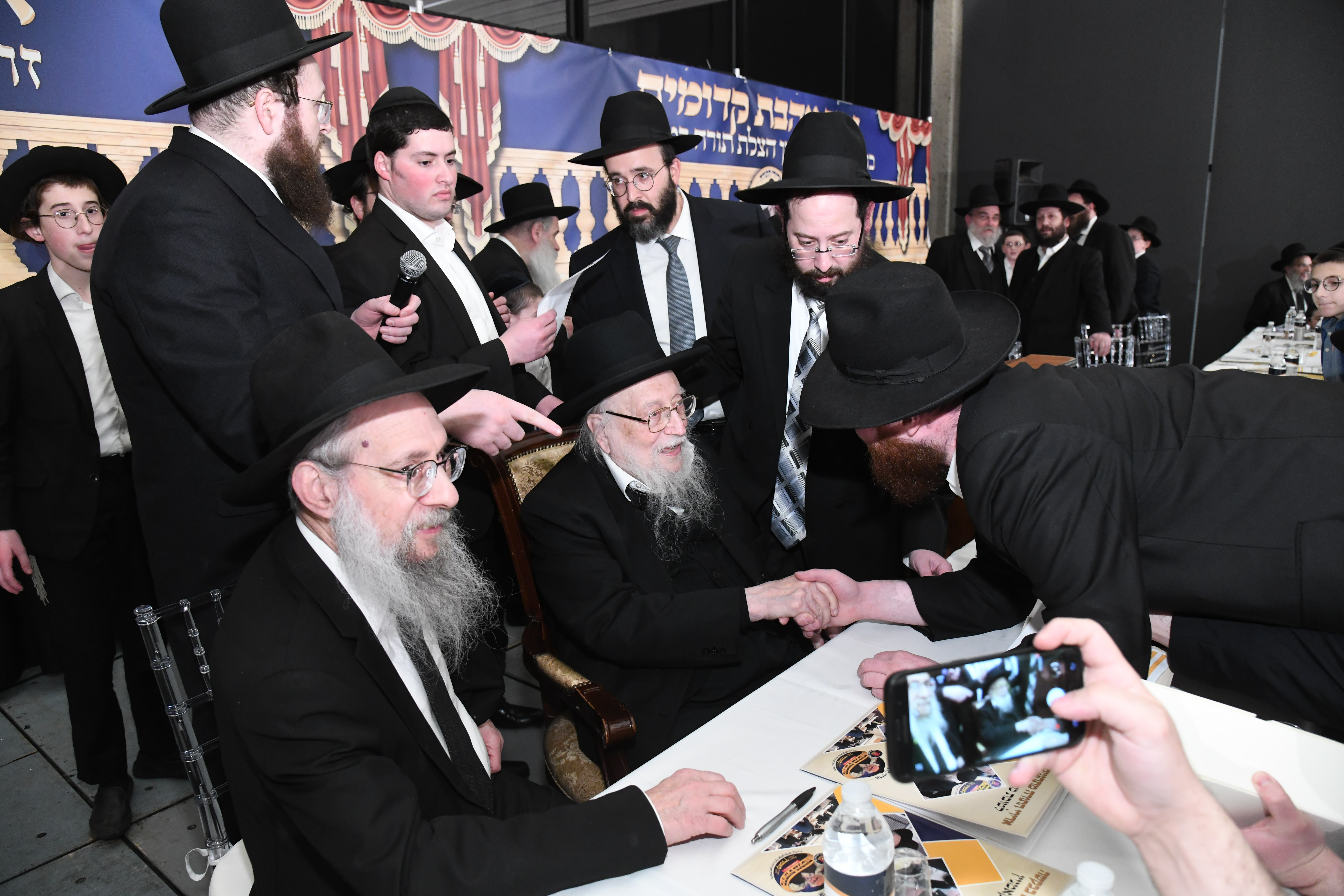 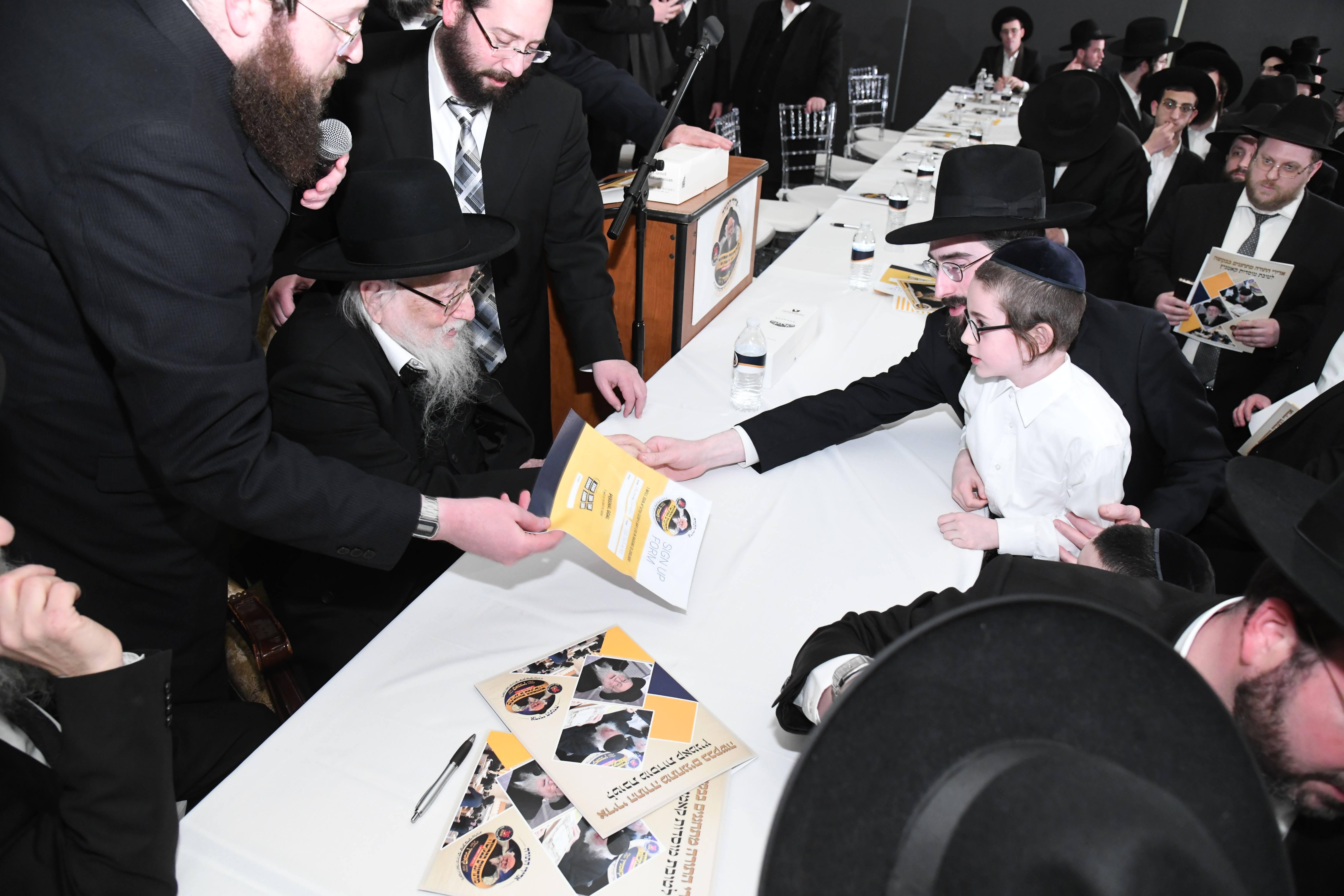 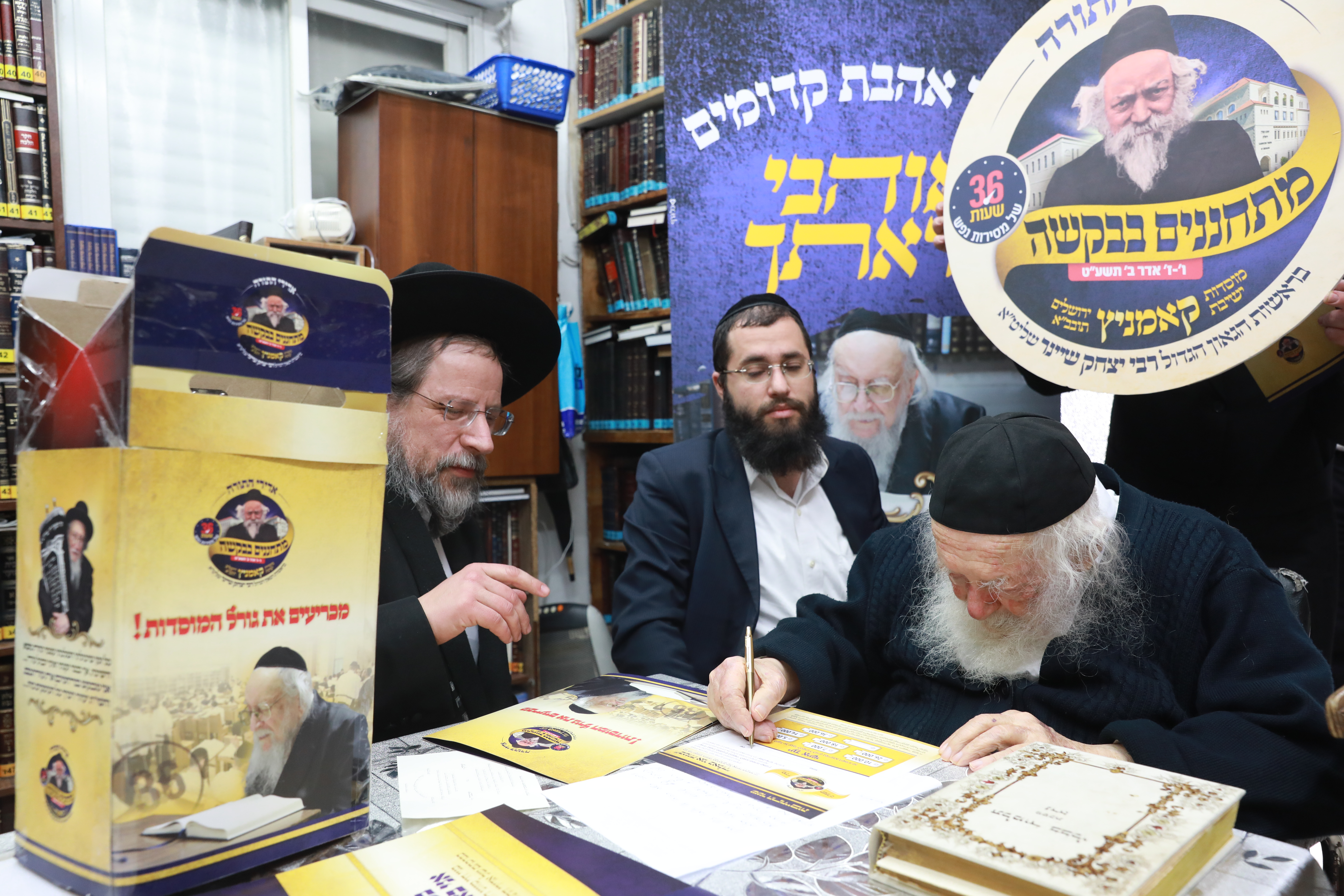 This article first appeared in the Ami Magazine