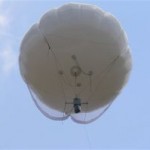 Israeli police have been flying surveillance balloons over the Yerushalayim’s eastern sector and Old City to monitor protests and move in on them quickly.

The “Skystar 180” balloons can stay aloft for 72 hours and carry highly sensitive cameras.

Rami Shmueli, CEO of the company that makes them, says the balloons give police an aerial view of those who are throwing stones.

“When we see their activity, we can direct the police forces to their location. And even if they escape we can follow them and make sure that police catch them.”

The balloons are part of a broad collection of surveillance equipment that includes security cameras throughout the city, including 320 of them in the Old City – as well as undercover units, riot-control forces and intelligence gathering.