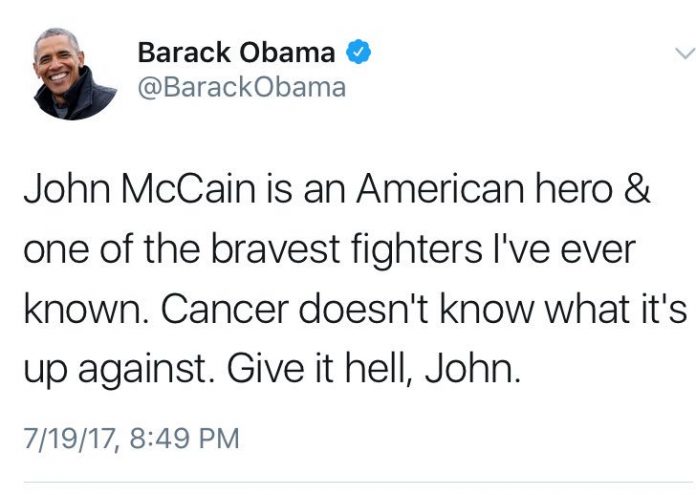 President Donald Trump, former presidents Barack Obama, Bill Clinton and George H.W. Bush, members of Congress and other Washington officials put aside bickering and partisan gridlock Wednesday night in a show of support for Sen. John McCain, R-Ariz., who announced he was diagnosed with a brain tumor.

Trump said in a statement on Twitter that “Melania and I send our thoughts and prayers to Senator McCain, Cindy, and their entire family.”

The Mayo Clinic Hospital in Phoenix said tests revealed a primary brain tumor known as a glioblastoma associated with a blood clot above his left eye that was removed last week.

“The Senator and his family are reviewing further treatment options with his Mayo Clinic care team,” said the hospital in a statement. “Treatment options may include a combination of chemotherapy and radiation.”

McCain, 80, was treated for the blood clot last week. His office announced last Saturday that he would be away from the Senate all of this week.

“The Senator’s doctors say he is recovering from his surgery ‘amazingly well’ and his underlying health is excellent,” the hospital said in its statement.

The late senator Edward Kennedy survived less than 15 months after he was diagnosed with the same condition.

McCain’s family, fellow members of Congress, statesmen and supporters immediately took to Twitter to express shock, prayers and many appeals to his tough reputation.

His daughter, Meghan McCain, tweeted a statement saying “he is the toughest person I know. . . . Cancer may afflict him in many ways: But it will not make him surrender. Nothing ever has.”

Sen. Jeff Flake, R-Ariz., said he spoke with his fellow senator from Arizona and that it was a “tough diagnosis, but even tougher man.” He joined fellow Arizonans former Congresswoman Gabrielle Giffords and Rep. Andy Biggs, R-Ariz., in messages of solidarity.

“I have been amazed by his energy and vigor for serving his country over the years, and the sacrifices he made for this nation are unmatched,” Biggs said. “I hope to see him back on Capitol Hill soon, and I know that he will fight this diagnosis with every ounce of strength he has within him.”

Giffords told McCain to “hang in there.” “You’re tough! You can beat this. Fight, fight, fight! I am proud to call you my friend.”

Politicians from both sides of the aisle offered their encouragement and prayers.

“SenJohnMcCain is a hero, a patriot and a fighter. I am privileged to call him a friend. Paul & I pray for his recovery and his family,” House Minority Leader Nancy Pelosi, D-Calif., tweeted.

From House Speaker Paul Ryan, R-Wis.: “SenJohnMcCain has always been a warrior. It’s who he is. All of us, not as Republicans or Democrats, but as Americans, are behind him.”

“SenJohnMcCain is an American hero. I pray for him and his family. I look forward to seeing him soon.

“Thinking about a hero, my Chairman, my friend John McCain. Stay strong!”

“My friend @SenJohnMcCain is a dogged ole S.O.B. Sharp as hell and tougher than a $2 steak. I look forward to catching up with him soon.

“John McCain has been a fighter all his life and this is just the latest challenge. We are praying for his speedy recovery.”

“Very saddened to hear of @SenJohnMcCain’s diagnosis. Stay strong, Senator. The country still needs you. We are sending our prayers your way.”

“Keep @SenJohnMcCain, Cindy, and his family in your thoughts and prayers. He’s a fighter, and we hope to see him back in the Senate soon.”

“Few Americans have served their county with such distinction, or in so many capacities. I wish him a speedy and full recovery.”

Sen. Chris Coons, D-Del., described a visit to Vietnam he took with McCain last month, remarking on the effort McCain has shown to stregntethn relations with the country.

“We visited the site where his plane was shot down and the prison where he was a POW,” Coons said. “Throughout our visit, I saw his humor and grace in recounting this very hard history, and in many meetings with senior Vietnamese officials, I saw the very high regard in which he is held throughout the country for his amazing work over 22 visits to Vietnam to reconcile our countries.”

George H.W. Bush, who has experienced his own bouts of recent health scares, gave McCain a stirring tribute Wednesday night.

“The Hanoi Hilton couldn’t break John McCain’s spirit many years ago, so Barbara and I know – with confidence – he and his family will meet this latest battle in his singular life of service with courage and determination,” he said.