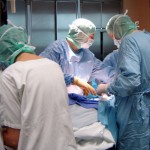 A fateful mistake was made today at Barzilai Hospital in Ashkelon, when a woman was brought in to have a cesarean section and had a tubal ligation, accidentally, instead.

Jerusalem Online reports that the surgeon mistakenly thought that this is what the woman wanted.

During the surgery, performed under general anesthesia, the doctor performed a tubal ligation, which is a medical procedure commonly performed during a cesarean section if the woman wishes. However, as she was removed from the operating room, it was made clear to the doctor that the woman had not wanted to undergo the irreversible process.

After the error was discovered, that the woman will not be able to give birth again in the future, her family was notified. As is customary in such cases, Barzilai Hospital updated the Ministry of Health of the mistake that was made.

Two years ago, there was an opposite case in the north. A couple sued Rambam Hospital in Haifa after their tenth son was born because of a failed tubal ligation procedure. The court concluded that the hospital will compensate the couple with 130 thousand shekel.