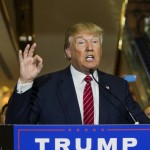 Donald Trump took his argument with Jeb Bush over his brother’s national security record to new heights on Sunday, arguing that he could have prevented 9/11 with his immigration policies.

“Jeb [Bush] said ‘We were safe with my brother. We were safe.’ Well, the World Trade Center just went down. Now, am I trying to blame him? I’m not blaming anybody, but the World Trade Center came down, so when he said we were safe, we were not safe. We lost 3,000 people. It was one of the greatest — probably the greatest catastrophe ever in this country,” Trump said on Fox News Sunday. “I am extremely, extremely tough on people coming into this country,” Trump continued. And with his policies, it is unlikely “those people would’ve been in the country. … There’s a good chance that those people would not have been in the country.” Read more at Politico.