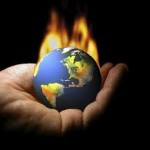 Secretary of State John Kerry has called climate change “the biggest challenge of all that we face right now,” and his French counterpart has warned of climate “chaos” in 500 days, and now the U.N. climate change chief is implying that climate change can be viewed on a par with the deadly Ebola outbreak.

Christiana Figueres told a World Health Organization (WHO)-hosted event in Geneva Wednesday that “we are not very far” from the point where climate change should be declared an international public health emergency, according to her prepared remarks.

Addressing a three-day global conference on health and climate – the first of its kind – Figueres said in remarks directed at WHO Director-General Margaret Chan, “Dear Margaret, as much as [I] would like you to, I am fully aware of the fact that you have not convened the international health regulations emergency committee to consider climate change as a public health emergency of international concern.”

“However, we are not very far from this,” she added.

The committee referred to by Figueres is the expert body on whose advice the WHO three weeks ago declared the Ebola outbreak in West Africa to be a “public health emergency of international concern” (PHEIC).

Under international health regulations, a PHEIC is declared in a case where “an extraordinary event” is determined to constitute a public health risk through the international spread of disease; and “to potentially require a coordinated international response.”

In her speech Figueres, who is executive secretary of the U.N. Framework Convention on Climate Change (UNFCCC) said that while it was easy to view climate change as “the equivalent of a disease” it was actually the symptom.

“The disease is something we rarely admit,” she said. “The disease is humanity’s unhealthy dependence on fossil fuels, deforestation and land use that depletes natural resources.”

“At the heart of an effective response to climate change is the challenge of taking responsibility for our actions and above all, making tough decisions to change the patterns that have been at the base of our development over the past 100 years, if we are to prevent severe worsening of health and quality of life conditions over the next 100 years.”