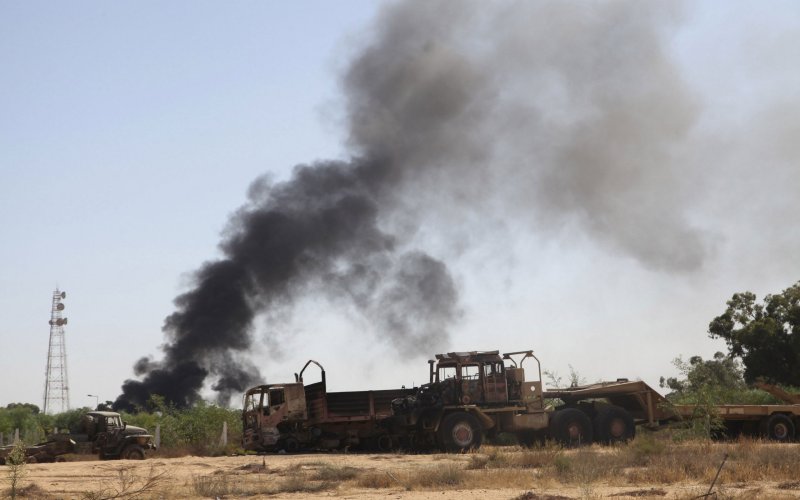 The U.S.military launched six drone strikes against Islamic State positions in Libya on Friday, months after militants were driven from safe havens there.

Officials announced the operation Sunday, saying 17 militants were killed and three vehicles were destroyed when unmanned aircraft targeted a desert camp about 150 miles southeast of Sirte, a coastal city where ISIS fighters were defeated by U.S.-backed Libyan forces last September.

Sirte served as an important logistics and planning hub for ISIS leaders, and it was considered a potential fallback if the terror group were to lose its de facto capital in Syria.

Friday’s attack comes as President Trump seeks to further relax restrictions on attacking terrorists outside active war zones. Since assuming office in January, his administration has sought to roll back Obama-era regulations restricting strikes that put civilians at risk or where there is no “continued and imminent threat” to U.S. personnel, The Washington Post reported in March.

Friday’s operation was the first reported U.S. strike inside Libya since late-January, when an estimated 80 ISIS militants were killed 30 miles from the Mediterranean coast.

In a statement, U.S. Africa Command said ISIS militants strategically capture ungoverned territory to recruit and plot attacks, including in Europe. Army Maj. Audricia M. Harris, a Pentagon spokeswoman, told The Post the strikes were carried out by unmanned aircraft but would not say which model. MQ-9 Reaper drones have been used for similar strikes in Libya.

The Pentagon maintains a small presence in Libya, mostly special operations troops and joint terminal attack controllers who can direct airstrikes from the ground. The U.S. often relies on Libyan government troops to pass on coordinates.

Libya has been engulfed in conflict since the fall of Muammar Gaddafi’s regime in 2011. U.S forces began targeting ISIS there since early 2016, when the militant group had upwards of 6,000 fighters spread throughout Sirte and surrounding areas. By this spring, officials estimated only 200 or so remained in Libya.

In the January attack, one of the last conducted during the Obama administration, two B-2 bombers and an unspecified number of Reaper aircraft unleashed nearly 100 weapons on ISIS training camps southwest of Sirte. At the time, U.S. officials declared the operation a potent blow to the Islamic State’s dwindling presence in the region.

“Was it a death knell for ISIS in Libya?” then-Pentagon spokesman Peter Cook said in January. “We’ll have to wait and see.”

Claudia Gazzini, senior Libya analyst for the International Crisis Group, told The Post on Sunday that the recent strikes do not indicate ISIS militants have regained strength, but it does confirm assessments that scattered militants are capable of massing to strike forces in a 100- to 150-mile bubble to Sirte’s south and east.

Secretary of State Rex Tillerson was in London on Sept. 14 to discuss simmering conflicts, including Libya, though Gazzini said it appears the U.S. will continue to deal with violence in the country from the air.

“This strike seems to indicate Libya is mainly an anti-terrorism file and only subsequently a political file” for the U.S. government, she said.