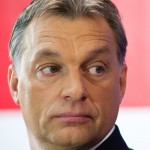 A bipartisan letter signed by 29 Jewish members of Congress to Hungarian Prime Minister Viktor Orban expresses “deep concern” over his decision to move forward, despite objections from the Hungarian Jewish community, with the construction of a monument commemorating the Nazi occupation of Hungary during World War II.

The 29 U.S. Representatives and Senators, led by Reps. Elliot Engel (D-NY), Henry Waxman (D-CA), and Eric Cantor (R-VA), called on the Hungarian government to recognize the “suffering of Hungary’s Jews during this period.”

“Hungary is a valued NATO ally and European partner with a long, impressive history-but one that includes a dark period of complicity during the Holocaust,” Waxman said in a statement.

Critics of the monument-slated to be constructed in Budapest-say it diminishes the role pro-Nazi Hungarian leaders played in the deportation of Hungary’s Jews to Nazi death camps. More than 500,000 Hungarian Jews were killed during the Holocaust.