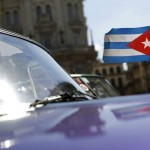 Officials said the White House is considering abstaining from the annual UN General Assembly vote on a resolution to lift the U.S. trade embargo on Cuba, the AP reported Monday.

Abstaining from the vote, which could come as soon as next month, would mean the U.S. would not oppose a resolution condemning one of its own laws. No decision has been made, according to four administration officials who weren’t authorized to speak publicly on issues.

Abstention also means President Barack Obama would be going against Congress, which has refused to lift the 54-year-old embargo. Cuba has introduced the resolution condemning the embargo and demanding its removal for the last 23 years at the annual UN gathering.

Officials said an abstention would depend on if the wording of the resolution is different than in previous years, but it’s unclear what those revisions would be. Read more.