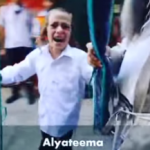 Two amateur video clips circulating on social media, both posted in Arabic, provide a glimpse into the less-reported side of the escalating tensions in and around Yerushalayim.

One, reported on by Matzav.com yesterday, shows a mob of angry Arabs verbally harassing Jews, among them children, as they make their way to the Kosel on Monday, the first day of Sukkos. Loud chants of “allahu akbar” accompany menacing fist-waving at passers-by.

The other captures a young Muslim man planting a hard, swift kick on a baby stroller being pushed by a father with a tallis on his head. Here, too, taunting and shouting in Arabic can be heard, while the father whisks his child away from the scene of the Old City of Yerushalayim site as fast as he can.

These incidents are part of the ongoing riots – characterized by rock-throwing and the hurling of firebombs – that have Israeli security forces stepping up efforts to prevent the violence and bring its perpetrators to justice.

As a result of what some are referring to as the beginning of a “third intifada,” or an armed Palestinian uprising, Israeli Prime Minister Benjamin Netanyahu has accused the Palestinian Authority of incitement to violence, and has imposed harsher rules of engagement for IDF soldiers and Israel police confronting this type of warfare, often involving the use of minors to carry out deeds that have proven to be fatal.

That stones can be used as deadly weapons hit home earlier this month, when 64-year-old Jerusalemite Alexander Levlovich succumbed to wounds sustained when his car was pelted by rocks, while he was on his way home from a Rosh Hashanah dinner.

Leave a Reply to just me Cancel reply