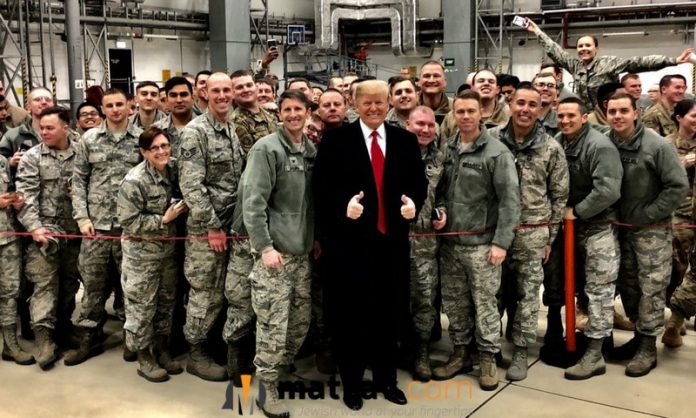 President Donald Trump greeted U.S. troops on an unannounced trip Wednesday to Iraq, where he defended his decision to withdraw forces from neighboring Syria and declared that the Islamic State is “very nearly defeated” while making his first visit to a conflict zone as commander in chief. 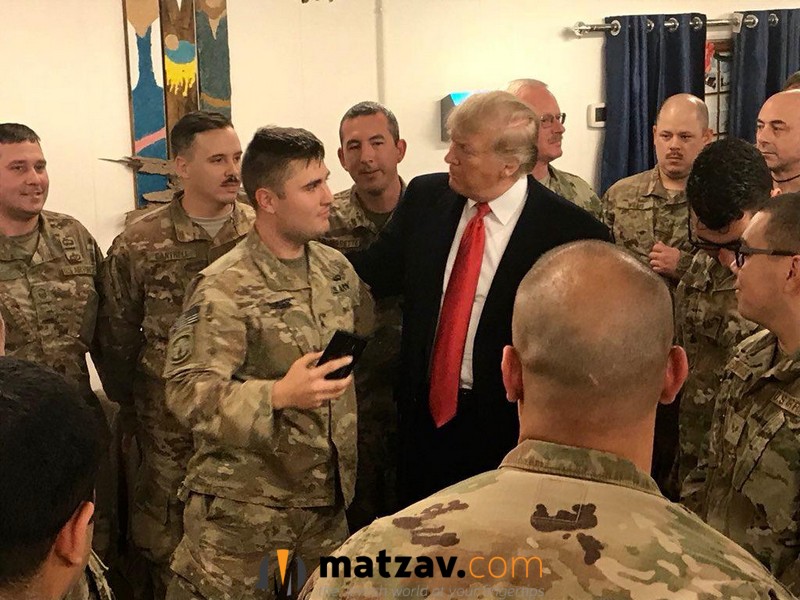 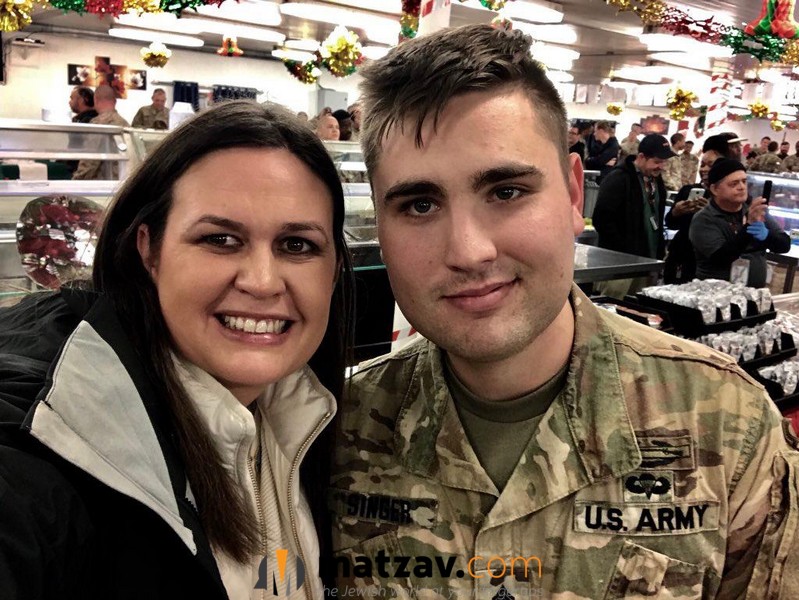 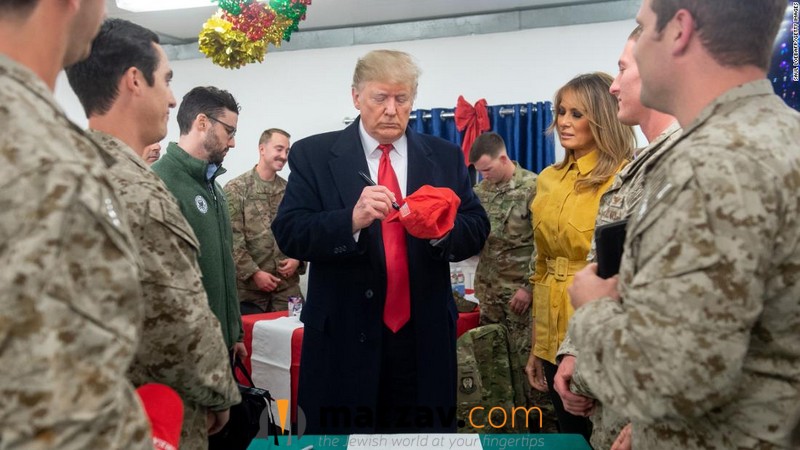 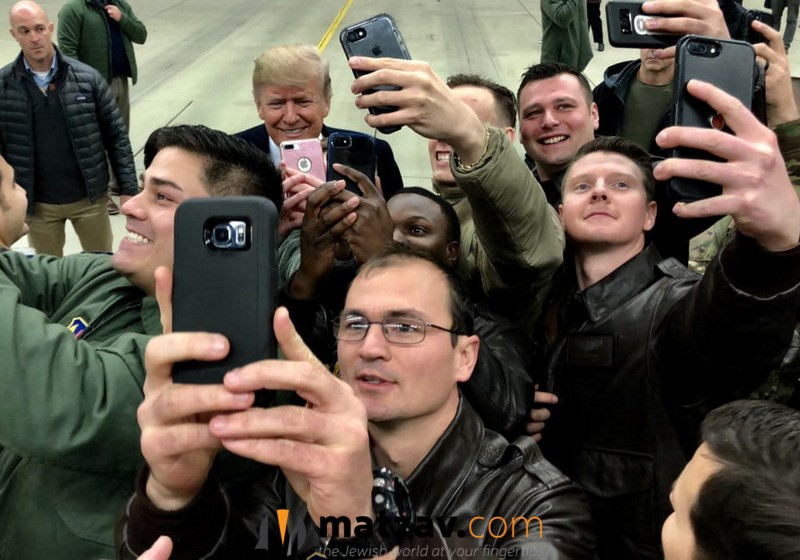 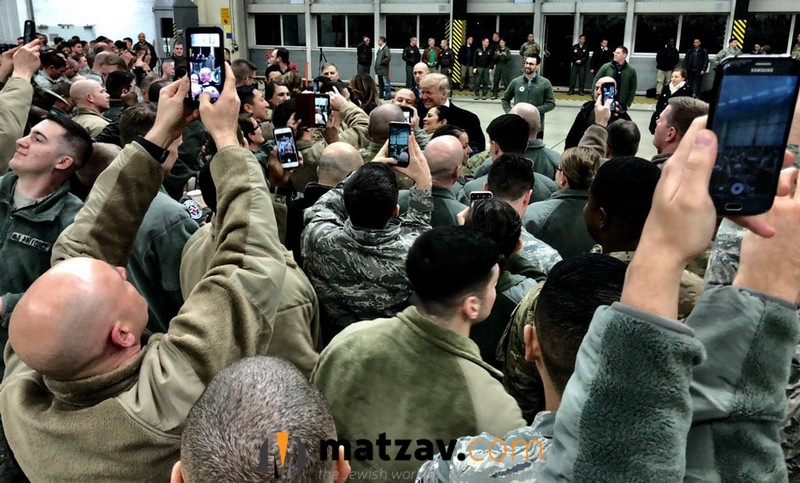 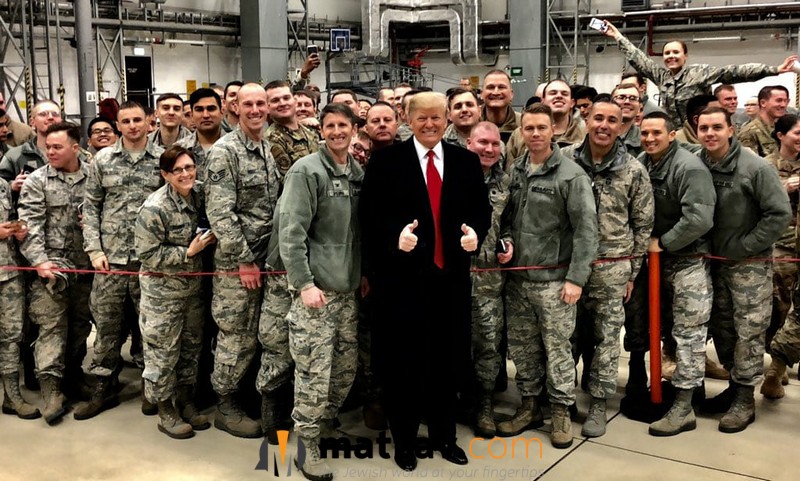 The president used his visit to al-Asad Air Base to amplify his call to draw down the U.S. presence in foreign wars and assert his personal influence over the military at a moment of tremendous turmoil at the Pentagon.

After months of public pressure for him to spend time with troops deployed to conflicts in the Middle East and Central Asia, Trump touched down at the joint U.S.-Iraqi base west of Baghdad after a secret flight from Washington.

Accompanied by first lady Melania Trump, the president sounded a triumphant note as he addressed U.S. service members on the day after Christmas. “We’re no longer the suckers, folks,” he said. And he warned that he was committed to withdrawing troops from foreign wars even when his administration’s experts object.

After a briefing with military and diplomatic leaders on the ground, Trump strongly defended his decision to pull out of Syria. But he said he had no plans to withdraw American forces from Iraq, which he said the United States could use as a staging ground in the heart of the Middle East from which to combat Iran, or someday reenter Syria.

“If we see something happening with ISIS that we don’t like, we can hit them so fast and so hard they really won’t know what the hell happened,” Trump said. “But it’s time to get our soldiers out.”

Trump told reporters traveling with him that he would deny any request from generals to extend the U.S. operation in Syria, where roughly 2,000 troops are deployed.

Trump, who spent the holiday at the White House amid a partial federal government shutdown, departed Joint Base Andrews near Washington aboard Air Force One at 12:06 a.m. Wednesday. He flew in the dark of night in an attempt to preserve operational security.

Trump’s cover risked being blown by eagle-eyed social media users. A Twitter user in Germany posted that he had tracked an aircraft that could be Air Force One, while a British-based Flickr user later posted a photo of a plane bearing the presidential aircraft’s blue-and-white color scheme flying through clear skies over Yorkshire.

After an 11-hour flight, the president and first lady landed at al-Asad Air Base at 7:16 p.m. local time. Trump was scheduled to meet with Iraqi Prime Minister Adel Abdul Mahdi, but the meeting was canceled for undisclosed reasons.

Trump traveled with a small group of journalists, who were ordered for security reasons not to report that he was in Iraq until he had finished delivering his remarks to the troops, roughly three hours into his visit to the base.

Asked why he decided to visit Iraq, Trump told reporters: “It’s a place I have been talking about for many years – many, many years. I was talking about it as a civilian.”

The president added, “I want to come and pay my respects, most importantly, to the great soldiers, great troopers we have here.”

Although Trump initially supported the invasion of Iraq in 2003, he later criticized the effort. He was also critical of President Barack Obama’s withdrawal from Iraq in 2011, saying the move created the Islamic State.

The unannounced visit continues a holiday tradition followed by past presidents.

Obama visited Afghanistan four times as president, most recently in 2014, and made a trip to Iraq shortly after his 2009 inauguration.

Although Trump had previously addressed U.S. troops stationed overseas, including in Italy, Japan and South Korea, he had drawn criticism for not having visited those deployed to combat zones.

Vice President Mike Pence visited Afghanistan on Dec. 22, 2017, to address troops and meet with commanders at Bagram air base near Kabul.

Al-Asad Air Base is northwest of Ramadi, a city that the Islamic State captured before U.S.-backed Iraqi forces retook the area.

Trump said he considered the safety risks in making his first trip to a war zone.

“I had concerns about the institution of the presidency,” he told reporters. “Not for myself personally. I had concerns for the first lady, I will tell you. But if you would have seen what we had to go through in the darkened plane with all windows closed, with no light anywhere. Pitch black. I’ve been on many airplanes. All types and shapes and sizes.”

For Trump, the war-zone visit was a chance to momentarily escape the growing peril for his presidency and generate images of himself acting as the commander in chief, complete with a bomber jacket.

Trump and the first lady mingled with uniformed service members at a base dining facility that was decorated for Christmas with foil balls, twinkling lights and snowmen made of stacked tires painted white. The president stopped to sign several “Make America Great Again” hats that service members brought, and at one point he autographed an embroidered patch that read “TRUMP 2020.”

Kyu Lee said that after he told Trump he was the chaplain for SEAL Team Five, the president responded, “Hey, in that case, let’s take a picture.”

Trump’s speech to troops had the feel of one of his campaign rallies. Elton John’s “Candle in the Wind” played as the service members awaited his arrival, and Lee Greenwood’s “God Bless the U.S.A.” played when the president strode on stage. Troops chanted, “USA! USA!,” and Trump told them: “At ease! Let’s have a good time.”

The feel-good atmosphere of Trump’s visit belied the pitched tension in Washington between the president and the Defense Department.

Mattis tendered his resignation last Thursday over Trump’s decision to withdraw troops from Syria and draw down numbers in Afghanistan, in addition to other differences. Although Mattis planned to leave in February, Trump on Sunday dismissed him early, demanding that the retired Marine Corps general leave the Pentagon by year’s end.

Mattis and other top advisers had cautioned Trump not to order a precipitous withdrawal from Syria, where the 2,000 U.S. troops enabled a Kurdish-led militia to roll back the self-declared caliphate of the Islamic State.

Despite declaring victory over the Islamic State, Trump later tweeted that Turkish President Recep Tayyip Erdogan “very strongly informed me that he will eradicate whatever is left of ISIS in Syria.”

Turkey views the Kurdish-led forces – which the United States has relied in the fight against the Islamic State in Syria – as enemies, and Pentagon officials worry that Turkish forces will massacre the Kurds while failing to prevent a resurgence of the Islamic State.

Trump has not said anything in the past week about the U.S. presence in Iraq, where about 5,000 American troops remain, assisting Iraqi government forces and Kurdish peshmerga fighters in the north in the effort to secure the nation from the threat of the Islamic State. U.S. forces reentered Iraq in 2014 after the Islamic State established its self-declared caliphate in Syria and swept through Iraq, reaching the outskirts of the capital, Baghdad.

Trump has long been critical of the war in Afghanistan, which was born of the Sept. 11, 2001, terrorist attacks and has stretched on for more than 17 years, becoming the longest U.S. war.

The United States is engaged in peace talks with the hope of ending a long-running stalemate between a resurgent Taliban and Afghan government forces, which Washington backs.

But Trump has directed the Defense Department to withdraw nearly half of the more than 14,000 troops deployed to Afghanistan, U.S. officials said last week, despite warnings from many of his senior advisers and military officials that the move would invite chaos and terrorism.

Trump has described the U.S. involvement in Afghanistan as a “complete waste” and vowed to bring home American troops. Top U.S. officials have warned that absent a peace deal with the Taliban, Afghanistan could collapse and descend into further turmoil after a precipitous U.S. withdrawal.

But as he visited Iraq, Trump bemoaned U.S. commitments overseas.

“We are spread out all over the world,” the president said. “We are in countries most people haven’t even heard about. Frankly, it’s ridiculous.” 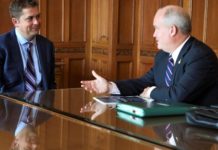