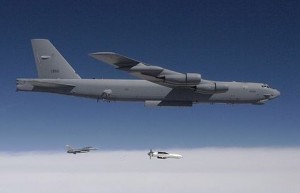 Nothing short of providing Israel with the Massive Ordnance Penetrator — the world’s most powerful “bunker buster” bomb — and the aircraft to deliver it will guarantee effective deterrence to keep Iran from skirting the nuclear deal to produce weapons of mass destruction, a group of influential Middle East security experts and former officials wrote in a review of the nuclear accords released on Tuesday.

It is important, on top of a credible U.S. military threat against Iran should the country try to maneuver its way to possession of nuclear weapons, that Israel maintain its own effective deterrence capacity, said the authors, which included longtime White House Middle East adviser, Dennis Ross, the director of Military and Security Studies at The Washington Institute, Michael Eisenstadt and former ambassador to Iraq and security adviser to president George W. Bush, James Jeffrey.

The MOP has long been seen as the military Plan B to dealing with Iran and its troubling nuclear program. It can penetrate fortified bunkers deep underground, burrowing up to 200 feet before unleashing 30,000 pounds of explosives deep inside its target. It carries the world’s largest nonnuclear payload.

Israel lacks both the MOPs and the bombers capable of delivering them; those capabilities belong squarely to the U.S.

The idea to arm Israel with the MOPs is not new. Last year, Lt. Gen. David Deptula and Michael Makovsky of the Jewish Institute for National Security Affairs (JINSA) made the recommendation in a Wall Street Journal article.

President Barack Obama spoke to an audience at American University on Wednesday saying he has been the best president for Israel’s security (no applause) and vowing to boost cooperation with Jerusalem over security and defense, particularly around destabilizing efforts in the region fueled by expansionist Iran. He also warned against another Middle East war, which to audience applause he explained were “anything but quick and simple.”

Israel has rejected all talks over a new military aid package until after Congress votes on the Iran deal.