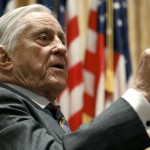 Ben Bradlee, the legendary editor who transformed The Washington Post into one of world’s top newspapers, has passed away at the age of 93. Throughout his 26-year career at The Post, Bradlee built a quick reputation of mixing hard-hitting reporting with moving features and made history with the paper’s coverage of the Watergate scandal, which led to the only presidential resignation in American history, that of Richard Nixon.

Circulation almost doubled during Bradlee’s tenure as he created more jobs and introduced now-staple sections in journalism such as Style, which was replicated by many others.

“Ben Bradlee was the best American newspaper editor of his time,” said Donald E. Graham, The Post‘s publisher, “and had the greatest impact on his newspaper of any modern editor.” Bradlee died of natural causes. Read more at The Washington Post.