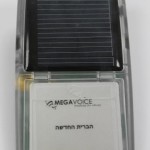 It isn’t just terrorists who attack Israeli soldiers at train stations and bus stops. Several Israeli soldiers informed Yad L’Achim that missionaries are accosting them with free MP3 players that come pre-loaded with readings from “the New Testament.” These readings can’t be erased, additionally, the MP3 player is programmed so that every time soldiers turn the devices on they are subjected to a sermon on Christian teachings.

In addition, the cults are distributing printed material that is made to look like a booklet of segulos (prayers) aimed at protecting soldiers. The booklet’s cover is in army-green and includes pictures of soldiers. Upon opening the booklet one discovers that it is packed with missionary material. It calls on soldiers to believe in “J” and gives the phone number of a missionary congregation that is particularly active in getting Jews to convert out of their religion.

Upon learning of these new ploys, Yad L’Achim dispatched activists to trouble spots to warn passersby and soldiers as to the nature of the material they were being handed. The outraged soldiers, deeply troubled by the nature of these materials, yelled at the missionaries, who hurriedly gathered their materials and left.

Yad L’Achim activists didn’t leave these scenes before collecting from soldiers all the material that had been distributed before their arrival.

Yad L’Achim officials this week reiterated that as long as Israel fails to legislate a comprehensive law banning all missionary activity, the missionaries, who enjoy limitless financial resources, will continue in their efforts to spiritually sabotage innocent Jews and drive them away from their religion, Heaven forbid.