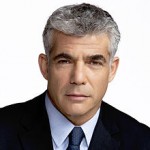 Chairman of the Yesh Atid party Yair Lapid criticized on Monday a U.N. report on last summer’s Operation Protective Edge, saying the United Nations was “out of its mind.”

Speaking at a Yesh Atid faction meeting, the chairman said “the report was born in sin and … should get a donkey’s burial. The very establishment of this commission is another example of how the United Nations has gone out of its mind.”

Lapid called the U.N.’s focus on Israel in light of the deterioration of the general situation across the Middle East an “obsession,” which “states that the Jews are always guilty for everything.”

Lapid also noted that the investigation intentionally ignored the kidnapping and murder of three Israeli teenage boys — Gilad Shaer, Naftali Fraenkel, and Eyal Yifrah — by Hamas operatives a few weeks before the IDF launched the operation. “They chose not to investigate this dastardly action by Palestinian terrorists. If this is not hypocrisy, I don’t know what is,” said Lapid.

Lapid also spoke of Israel’s morality. He noted that the IDF set up a field hospital near the Gaza Strip to treat Palestinians injured in the fighting, and the IDF practice of sending warnings to civilian populations before carrying out airstrikes. Additionally, the IDF employed military legal advisers to ensure that the army’s actions coincided with its obligations under international law, he said.

“Never, in all of the history of wars, was there an army that did more than the IDF in order to avoid harming innocent people,” said Lapid.

“I was at the U.N. last week, along with a team from our embassy staff stationed there, and heard them tell me of the holy work they are carrying out there,” said Lapid, adding that, “It’s not the IDF – the most moral army in the world — that the U.N. should be investigating, but rather itself.”