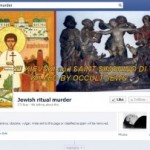 A Facebook page entitled “Jewish Ritual Murder” was taken town and then reactivated within a 24-hour period after the social media giant reconsidered its decision that it violated their community standards, The Algemeiner has learned.

Dexter Van Zile, an analyst for media watchdog CAMERA, reported that he had been notified by Facebook that the page had been removed on Thursday, after a long campaign by Jewish activists and groups.

But on Friday, The Algemeiner received multiple reports of Facebook users who had complained about the page, being informed that it was now back up.

At the time of publication the page in question, which was created in 2012, had 662 “likes,” though it does appear to have been updated since February 2014.

The page is replete with absurd claims of Jewish brutality. “For most of history, belief in Jewish ritual murder was acceptable and widely accepted. Naturally, the Jews aren’t the only group who have practiced (and might still practice) ritual murder,” reads the most recent post.

On its community standards page, under the header “Hate Speech,” the social media giant claims that,”Facebook does not permit hate speech, but distinguishes between serious and humorous speech. While we encourage you to challenge ideas, institutions, events, and practices, we do not permit individuals or groups to attack others based on their race, ethnicity, national origin, religion, sex, gender, sexual orientation, disability or medical condition.”

In February, Jewish human rights group, the Anti-Defamation League, said Facebook’s assertion that the page doesn’t violate their Community Standards is an “unacceptable excuse,” and called for it to be removed immediately.

“The ‘Jewish Ritual Murder’ page on Facebook perpetuates age-old anti-Semitic propaganda, and it should be removed immediately. It is profoundly offensive, has no socially redeeming value, and adds nothing to any legitimate marketplace of ideas,” Abraham H. Foxman, ADL National Director, said. “This page targets all Jews, and Facebook’s position that it technically does not violate their Community Standards because it does not target individuals is an unacceptable excuse. We do not believe that Facebook intends to send a message that they are insensitive to the enormous harm the blood libel has caused throughout Jewish history, and the easiest way for them to make that clear would be to exercise the discretion they certainly have to remove the page.”

Facebook, which was created by Jewish entrepreneur Mark Zuckerberg, has been accused in the past of allowing anti-Semitism to flourish on its pages. Last September, Algemeiner blogger David Fischler said he was “flabbergasted” when he reported a page that portrayed “all of the anti-Semitic greatest hits,” and was similarly told that Facebook’s community standards were not violated.