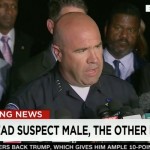 Both suspects reportedly died during a standoff with police, after they fled the social services facility where at least 14 people were shot and killed.

One of the suspects, Burguan revealed, was a woman. They were found with body armor and rifles.