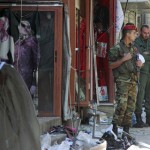 Lebanon officials said on Sunday they had arrested 11 people in connection to the Beirut bombings last week that left 44 people dead.

Speaking at a news conference, Interior Minister Nuhad Mashnuq said those arrested included “seven Syrians and two Lebanese, one of them a [would-be] suicide bomber and the other a trafficker who smuggled them across the border from Syria.”

The 11 individuals were arrested within 48 hours of the two explosions, Mashnuq added. The would-be suicide bomber was arrested in the northern port city of Tripoli after he failed to detonate his bomb. ISIS claimed responsibility for the attack in Burj el-Barajneh, a Hezbollah stronghold in southern Beirut. Read more at AFP.