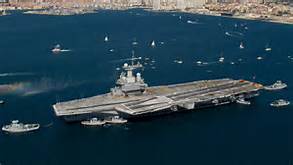 The most expensive warship ever built has been put through its paces for the very first time.

The US Navy revealed Saturday the first of its new class of the USS Gerald R. Ford has headed out to sea off the coast of Virginia.

The new aircraft carrier embarked on the first of its sea trials to test various state-of-the-art systems.

The $12.9 billion carrier departed from Huntington Ingalls Industries-Newport News Shipbuilding in Newport News after more than a year’s delay and cost overruns.

But there were issues with the carrier’s advanced systems and technology, including aircraft landing equipment and power generation.

The ship is currently undergoing builder’s trials. It will return to port in Virginia before embarking again for ‘acceptance trials,’ which are conducted by Navy inspectors.

The opening test comes almost an entire year after ‘poor or unknown reliability issues’ were identified in a memo last year. See more at Daily Mail.