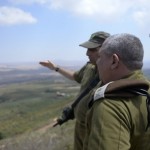 Eizenkot was briefed on the ongoing Syrian civil war and its security implications for Israel. A number of high-ranking IDF officers, including GOC Northern Command Maj. Gen. Aviv Kochavi, accompanied Eizenkot on his tour of the Golan.

Just last week, the IDF struck more than a dozen Syrian military targets in response to rockets fired from Syria into northern Israel by the Iranian-backed Islamic Jihad terrorist group. The cell that fired the rockets was also targeted and eliminated by the IDF.