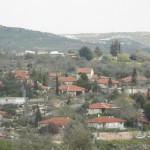 An Israeli man was lightly wounded on Sunday afternoon in a Palestinian drive-by terrorist shooting attack in Samaria.

Ronen Edri, a resident of Shavei Shomron, came under attack while driving through the Jit junction between Kedumim and Havat Gilad in northern Samaria. Despite being wounded, he continued on to a nearby Israel Defense Forces base to report the shooting.

Edri was transported to a hospital in Kfar Saba for treatment of his wounds. He was discharged after several hours.

Recounting the attack, Edri said, “It was a normal work day for me. I was driving, and there was a vehicle in front of me that was driving relatively slowly and looked suspicious. I turned right at the junction, and I heard a loud noise. A volley of bullets hit the window on the left side of my vehicle. I hit the accelerator to get out of there as quickly as possible. I was very lucky, as the whole front passenger’s seat was riddled with bullets.”

Edri, who is married and has children, expressed anger regarding the security situation in Samaria. “We don’t feel safe in Samaria. I feel like this is a game of Russian roulette. You’re driving down a road, and suddenly they shoot at you. I’m a citizen of the State of Israel and I want to feel safe in my country.”

Yossi Dagan, the head of the Samaria Regional Council, blamed the shooting attack on the lifting of military checkpoints in the area.