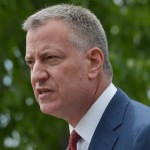 An explosion rumbled through the streets of Borough Park on last week’s Shabbos.

The explosion resulted in emergency crews rushing to the scene to aid any and all locals that were affected. Politicians and members of the Jewish community addressed the press expressing gratitude toward all of the rescue teams involved.

Mayor Bill de Blasio followed suit, thanking emergency respondents that arrived on the scene for their bravery and prompt assistance — except for Hatzolah.

The mayor, who used to represent City Council, completely ignored the major Jewish volunteer group that Jews and non-Jews call in time of need when addressing the public in the aftermath of the tragedy, leaving Jewish community members furious.

“It’s an outrage that politicians failed to realize they were there on the scene,” community activist Joe Gross said regarding de Blasio’s failure to mention the organization. “It’s a volunteer organization that’s available 24/7, and is there for every person’s need. No one recognizing them is just shameful. They should be recognized.”

Gross went on to explain that if politicians are willing to acknowledge the NYPD and FDNY for securing the premises, then all organizations involved should be recognized.

The 33-year-old father and 10-year-old son that sustained serious injuries following the explosion were treated by Hatzolah, and when FDNY EMS arrived at the scene, they were long transferred to Methodist Hospital.

Whether it’s responding to local outcries, the recent Brooklyn explosion, or the terrorist attacks on Sept. 11, the volunteer crew also saves the city millions of dollars, as it’s a volunteer-based organization.

“It’s Shabbas,” said de Blasio with a Yiddish accent at an address following the incident. “This is a tragedy in a community I know well.”

JP previously reported that the mayor since being elected into office never came to Borough Park outside of a fundraising event and a shiva call. That is, of course, until Saturday’s explosion brought him out to address the people he used to represent.

And yet, de Blasio has yet to correct the error in leaving out a vital organization within the community.

“Here it is four days later,” Gross said counting back the days of the explosion. The community activist reiterated that he wasn’t accusing of anyone doing anything deliberately, but suggested that it’s “never too late.”

“[Hatzolah] can still be recognized now.”

When JP reached out to the mayor’s office for a response, spokeswoman Amy Spitalnick suggested that not all information was available when the mayor arrived on the scene. “[Mayor de Blasio], of course, deeply appreciates Hatzolah’s quick response and willingness to serve their fellow New Yorkers, which he has seen first-hand from his time in the Council and beyond.”

In addition the mayor’s office, JP asked for a comment from Councilman David Greenfield, but received no comment.

To listen to the mayor’s press conference, click here.