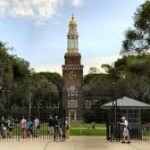 1.      Exercise your own First Amendment rights and publicly condemn the SJP for its hateful, anti-Semitic, wrongful and possibly unlawful actions.

2.     Open a full investigation into the SJP’s conduct – including its alleged violation of New York City legal provisions prohibiting chalking on the sidewalk, its harassment and intimidation of Jewish and pro-Israel students, its incitement of violence against Jews, and its public and vulgar flouting of the rules that apply to all students and student groups.  If the evidence supports these allegations, then the group’s registered status should finally be revoked, in accordance with Brooklyn College’s Rules and Regulations for the Maintenance of Public Order. This group does not deserve a place on the Brooklyn College campus, until it can conform its conduct to the rules and standards that apply to everyone else.

3.      The CUNY Bylaws require that “[e]ach student leader and officer of student organizations recognized by or registered with the institution, as well as those seeking recognition by the institution, must complete training on domestic violence, dating violence, stalking, and sexual assault prevention and on CUNY’s Policy on Sexual Misconduct prior to the organization receiving recognition or registration.”  Conspicuously missing is mandatory training on anti-Semitism and other forms of bigotry, and it should be added as a requirement.  If the SJP’s permission to operate on campus is rescinded, or if the group is admonished or sanctioned in any other way, then it should be required to complete an educational program on anti-Semitism, including its history and contemporary manifestations, as well as diversity training on tolerance and respect, as a condition of being allowed to operate on campus.

4.      Publicly state that there will be zero tolerance for anti-Semitism at Brooklyn College, and educate the campus community about the many forms that anti-Semitism takes today, referring specifically to the definition of anti-Semitism that the U.S. government has been using for years.  (See http://www.state.gov/j/drl/rls/fs/2010/122352.htm.)  That definition is important because it makes it clear that while not all criticism of Israel is anti-Semitic, some anti-Israelism crosses the line into anti-Semitism and is just as hurtful and harmful to Jews as the “old-fashioned” anti-Semitism.
As you know from our previous dealings, the ZOA is fully committed to ensuring that Jewish students at Brooklyn College are afforded the kind of campus environment  that every student deserves – one that is physically and psychologically safe and conducive to learning.  That is their legal right under Title VI of the Civil Rights Act.  We urge you to protect that right by responding immediately and forcefully to the SJP’s hateful, anti-Semitic and violence-inciting conduct before the situation escalates any further and actually becomes violent.  If violence does occur and someone gets hurt, then the college administration will bear responsibility.
We look forward to hearing from you next week and would be pleased to assist in any way.
Very truly yours,
Morton A. Klein                                               Susan B. Tuchman, Esq.
National President                                          Director, Center for Law and Justice