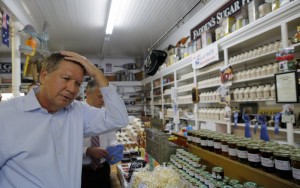 John Kasich is fed up with his competitors in the Republican primary.

“Do you know how crazy this election is?” he shouted during a pre-debate rally in Ohio on Tuesday. “Let me tell you something. I’ve about had it with these people. Let me tell you why. We got one candidate that says we ought to abolish Medicaid and Medicare. You ever heard anything so crazy as that, telling our people in this country who are seniors or about to be seniors that we’re going to abolish Medicaid or Medicare,” Kasich continued, referencing Ben Carson who has changed his opinion on the matter seemingly overnight, reports Gideon Resnick for the Daily Beast.

“We got one guy that says we ought to take 10 or 11 million people and pick them up, where the—I don’t know where, we’re going to go in their homes, their apartments. We’re going to pick them up and we’re going to take them to the border and scream at them to get out of our country,” Kasich said in an obvious dig at frontrunner Donald Trump. “Well that’s just crazy. That is just crazy.”

“We got one candidate that claimed, one candidate that actually said that the reason why we signed an agreement with Ford to bring jobs back from Mexico is because he’s been yelling for the last week ok,” Kasich said again referencing Trump to uproarious laughter. “That was like something out of a Back to the Future movie.”