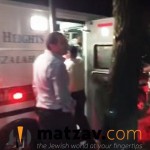 [Updates, multiple videos and photos below.] A Hatzolah member has been stabbed in Crown Heights, Brooklyn, sources tell us. The suspect remains at large.

It is being reported that there was a second victim as well.

Update: The Hatzalah member was stabbed by the assailant on Eastern Parkway, between Nostrand and Rogers Avenues. The Hatzolah member was taken to Kings County Hospital and is in stable condition.

Update: Sources indicate that the attacker snuck up on the Hatzolah volunteer from behind. A witness stated that the attacker was an African-American male wearing a hoodie. Claims of a second victim are unfounded.

A source at the scene told Matzav.com that it appears that the attack was unrelated to the victim being a member of Hatzolah.

All are asked to say Tehillim for Dovid Shlomo Hakohen ben Shterna Malkah.