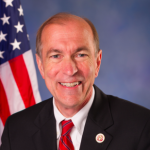 Rep. Scott Garrett (R-N.J.), who recently led a bipartisan Congressional delegation on a fact-finding mission to Israel, said each of the last two presidential administrations (George W. Bush and Barack Obama) have taken the “wrong view” by refusing to move America’s Israeli embassy to the capital of Jerusalem.

Garrett, who is Christian, represents a majority-Jewish population in his district and has a strong pro-Israel record in Congress. He was on the Iran sanctions committee of 2010 and in 2013 introduced a bill to move the U.S. embassy from Tel Aviv to Jerusalem.

In a radio interview on the “Yishai Fleisher Show,” Garrett said, “Ever since I’ve been in Congress I’ve supported the Israeli position on where their capital should be. I believe any sovereign nation has the right to make that determination.”

Garrett also slammed the Obama administration-brokered Iran nuclear deal, saying it “facilitates the undoing of what [Congress] was trying to do back in 2010” through sanctions.